It’s official. I am the worst “Dance Mom” ever. My 4-year-old daughter
had a rehersal last night for her upcoming recital. I almost missed it. I thought it was on Friday. Luckily, a good friend sent a reminder text. Dionne had it all wrong. That is what friends are for. She told me the time, location, what to bring, etc. and I still messed it up.

I made rookie mistakes. Her hair was supposed to be in a ponytail. It wasn’t. I forgot to get tights. So, my daughter had to wear the pair my friend’s daughter wore last year. “Keep smiling, keep shining.” I won’t be cast on a Lifetime reality show anytime soon.

I had no idea how much work goes into a recital. These instructors spend countless hours choreographing the routines. The rehearsal is very organized. Each dance group has a number. They are in full costume, have assigned seating and wait for their turn to perform. I looked like a tourist, wandering up and down the aisle trying to find our seat. I brought the entire family. They wouldn’t have to sit for hours watching the rest of the dance group. Who are we kidding? They don’t want to watch your kid dance. I don’t have time for that either. There is a pile of laundry taller than Bruno Mars calling my name.

Other moms actually read the detailed fliers the dance instructor sent home. So, they knew if their group was #21 they weren’t going to take the stage for a few hours. I no read much. So, we arrived early which meant my daughter had two hours to ask, “Am I next?” 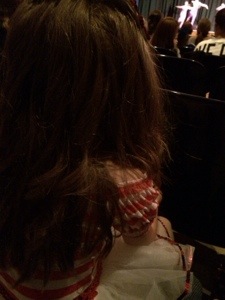 Then, she got hungry. So, I handed her a bag of sour cream and onion potato chips. There is a vitamin in there somewhere, right? It was a small bag. She finished just in time for her group to be called. I got a little teary eyed when the curtain opened. It wasn’t because my daughter was the only one who forgot her gloves. How could my baby be old enough to be on that stage? She looked beautiful in her costume. The dance routine was adorable. Afterward, she was smiling ear to ear. Her brothers, who had been complaining about the long wait, hugged and congratulated her. They were as proud as we were. They actually love each other. I may be a sh*tty dance mom, but I am doing something right.