I got in the shower tonight, tripped and nearly knocked myself out. That would have been a memorable 911 call for the EMTs. “Yeah, we have a naked, middle aged mother unconscious in the shower.”
I stepped on Princess Belle. Let me tell you, that broad has some claws. Cinderella and Ariel were stuck, feet first in a thin bar of soap. There are toys everywhere. I know someday I will miss seeing Spider-Man hanging from a light fixture. The day will come when the house will be tidy and I will hate it. I will never miss picking Lego pieces out of a dirt filled vacuum. Most parents have gone through trash for their children. I have sifted through food scraps, coffee grounds, etc. looking for a toy my daughter thought she threw away. My hands were covered in slimy lettuce and ketchup when she stopped crying and declared, “Oh, I remember where I put it!”

I recently attempted to get rid of some toys. Unfortunately, I made the rookie mistake of going through the stash while the children were home. Instead of decluttering it turned into Christmas morning. “I forgot I had that!” Really? You forgot about the toy you bitched and moaned for a year to have? You forgot about the toy I bought from eBay at an inflated price? I think there is a special place in hell for professional eBay sellers.

My children suddenly wanted to play with everything. They also pleaded with me to keep the misfit toys.

“I love that doll missing all her limbs.”

“That car, without any wheels, is my favorite.”

“I play with that broken slinky all the time.”

They are a bunch of liars when the Goodwill box comes out. I have to do something before I end up on “Hoarders.” That show is bad, but “My Strange Addiction” is even worse. How the hell does one become addicted to chewing on dirty diapers or their couch? Nancy Reagan needs to launch a new campaign. “Just Say No to Eating Your Mattress. .

We celebrated my daughter’s birthday this weekend. Pet Shop Barbie is shaking in her boots. She may be voted off the island to make room for all of these gifts. My daughter did not get a “Breaking Bad” action figure. Do you want to know why? Because they aren’t meant for kids. I am sure you heard the story about the Florida mother petitioning to have them removed from store shelves. I am disappointed Toys R Us caved to the pressure. No, I won’t allow my kindergartner to play with toy bags of meth. That’s the beauty of living in America. You don’t have to buy them. 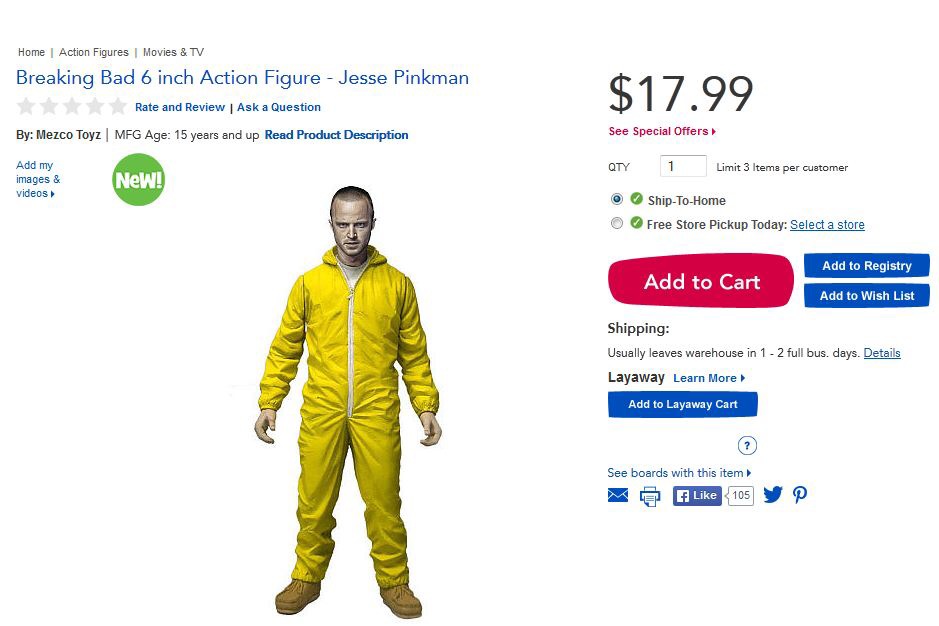 They are collectors items for fans of the show. I am not a collector. I don’t have spoons from each of the 50 states or a curio cabinet with Precious Moments figurines. However, I don’t think one uptight woman should dictate what is sold in any store.

My mother got my daughter a talking toy bird. It was her favorite gift. The toy bird even beat out the Elsa doll I sold my soul to buy. I think talking toys are made by Satan in a factory in China. Do you know what else is made by the devil?

1.) Glitter – unless you are a hooker there is never a good reason to give a child a toy with glitter. It is impossible to clean up which is why I have a retraining order against Ke$ha.

2.) Sprinkles – sprinkles are great until your child tries to eat something with sprinkles. Unless you are decorating cookies with superglue, those suckers will fall everywhere.

3.) Feathers – I bought my daughter a pink feather boa to play dress up. One of her favorite books features a sassy duck wearing a boa. Now, it looks like a duck exploded in my house. Every time I turn around I am finding feathers.

My kids love it. They also love dropping it on the ground and stepping on it. My daughter is constantly mixing all the colors. That could be the one thing that sends me to the mad house. OCD + brown Playdough = nervous breakdown.

5.) Sandboxes – Who do we think we are? God put sand on the beach for a reason.

6.) Teddy bears – they multiply like rabbits and are rarely played with.

7.) Caillou – That little f*cker will make the list every time.

I could go on and on. Unfortunately, the sun has set and the children are asleep. I have a mission to complete. Not even GI Joe can’t save you now Polly Pocket.