My Memorable Trip to Mississippi

Sixteen years ago I felt like a hero.  I registered to be a bone marrow donor and got the call. I was a match.  I could help save the life of a 4-year-old boy.  It felt like I had won the lottery.  Yes, my idea of winning big is having a giant needle inserted in my bone. I wish they would have warned me that I would be lying face down, bare assed in front of a surgical team during the procedure. I would have ordered Buns of Steel. I don’t know if I would have worked out, but I would have ordered it. Actually, the feeling was greater than anything money could buy.  I had a purpose.  I’m not sharing this story to garner praise. I’m no saint. I mock adults who wear Tigger sweatshirts and occasionally snub Salvation Army bell ringers at Christmas. I’ve found it’s best not to make eye contact. I usually pretend to be looking for my keys. If I gave money every time I left a store I would be broke.

I walked out of that hospital feeling like a million bucks. I knew the recipient was a child; a toddler. He was going to live because of me. I was his angel. It turned out I was wrong and he would be mine. That sweet baby boy passed away in the arms of his loving parents. I struggled with his death for a very long time. I still do.

It was policy not to share the recipients information without permission. So, I tracked down his parents on the internet.  It wasn’t easy. This was back in the day of dial-up internet when you couldn’t talk on the phone and use a computer at the same time. Any teenagers reading this just had their minds blown.

The only thing I knew was the child was treated at St. Jude’s Hospital in Memphis, Tennessee.  I  found several articles including one about a fundraiser in Desoto County, Mississippi  for a little boy named Shae who needed a bone marrow transplant.  I kept searching and found Shae’s obituary.  The dates matched.  It was him.  The only address I could find was for Shae’s grandparents.  I mailed them a letter. I don’t recall exactly what it said other than I am sorry.  I was sorry their baby’s body rejected my bone marrow. I was sorry I couldn’t help them. I was sorry I would never get to meet sweet Shae.   Most people would have filed a restraining order. This family did the opposite, embraced and thanked me.  I received a note of gratitude every year on the anniversary of the day I donated. I did not feel worthy.  In the 15 years that followed we talked on the phone, sent text messages and communicated on social media.  I named my daughter Vivienne Shae.  Year after year they expressed a great desire to meet me.  I struggled with the idea of it.  I wasn’t ready to come face to face with them.  Then, recently Shae’s father, Todd, was diagnosed with Familial Pulmonary Fibrosis.  It is basically a condition where his lungs harden. He is on a list for a double transplant.  On March 25th, their church family held a fundraiser for Todd.  I saw the event posted on Facebook and knew it was time.  I booked a flight and hotel.  I contacted his sister to let her know I was coming.  I opted not to tell Todd and his wife in case plans fell through.

I arrived at the church on Saturday when the event was in progress.  Todd’s sister escorted me inside to Shae’s mother, Dawn. She covered her face with her hands and began to weep.

Then, she brought me to Todd. We embraced and cried. 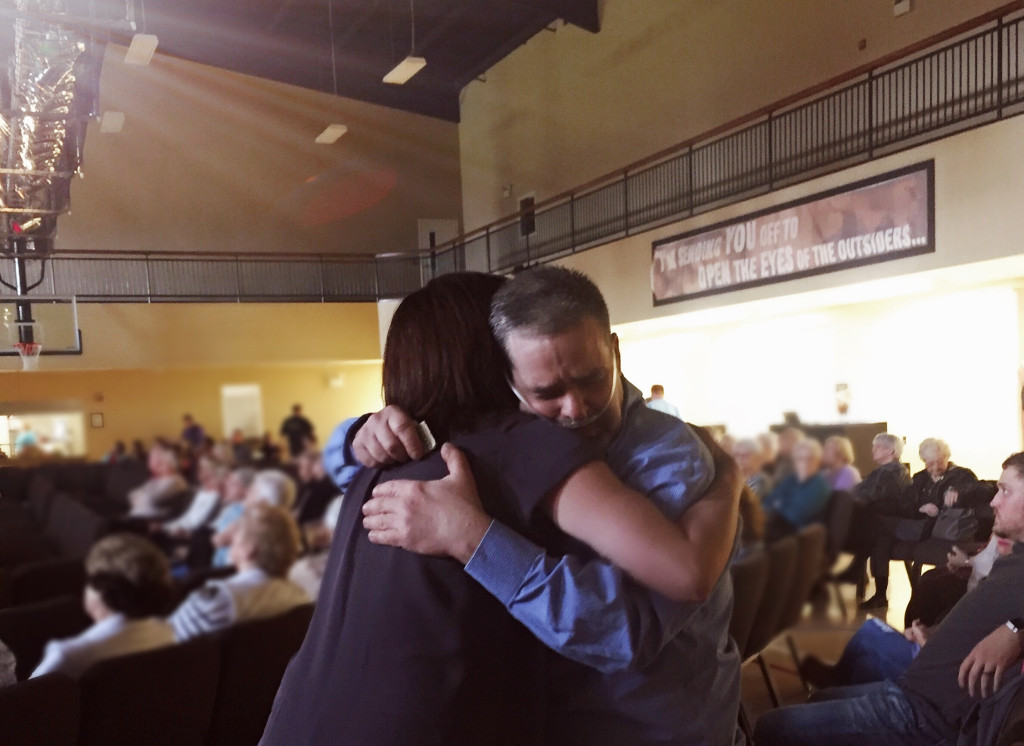 Dawn’s father, a burly southern man, wearing a cowboy shirt and blue jeans could barely speak.  He managed to get out a few words.  “For 16 years I had on my bucket list to meet you. I didn’t know how I would make that happen, but I knew I would.”

One by one members of their family, wiping tears, hugged and thanked me.  I still don’t feel worthy, but I love this family and my angel named Shae.

Register to be a bone marrow donor: https://bethematch.org/