My so called life

Scrolling through Facebook can be emotionally draining especially if you’re having a bad day. Today was a perfect example.  I sounded like Foghorn Leghorn reading the news on the radio this morning.  I logged online and Facebook kicked me when I was down.  Once again, there was ‘that friend’ bragging  about her perfect life.  She gives a daily shout out to her husband who never does anything wrong.  He doesn’t even have a Facebook account.  Her job is also perfect.  Her children, too.  You know it’s a lie, but it doesn’t stop you from second guessing everything in your life.  What am I doing wrong?  There have been times when I thought about deleting social media accounts because the pressure to keep up with the Joneses is overwhelming.  Plus, it is horrible for my diet.  There are just so many pictures of food.  I had no idea so many people ate lunch before Facebook.  I thought I was the only one.

There was a great article in the New York Post this weekend about people living double lives on Facebook. No, I don’t air my dirty laundry on social media.  (I don’t think there are enough characters in a post.) I don’t have the time or energy to write a fairy tale either.  Here are a few common Facebook posts and what more than likely happened.

Reality:  Your daughter cried because she wanted an overpriced toy.  You had to scold her through clenched teeth.

Reality:   They enjoyed a delicious dinner.  You snagged a bite of cold food here and there in between runs for drink refills, napkins, telling a child to sit down and eat, etc.

Reality: Spent 30 minutes arguing over which movie to watch.  One child complained that the other got more popcorn.  Shame on you for not counting each popped kernel before placing it in the bowl.

Reality:  You sat outside in the cold and rain for hours to watch your son play a total of three minutes. You love him. So, it was worth it…for three minutes.

Facebook: I married the greatest man on the earth!  Happy Anniversary Hubby!

Reality: If he leaves his socks on the floor again you are going to lose your mind.  Are you trying to convince the rest of the world or yourself how great your marriage is? Chances are he is standing nearby – turn your head and tell him how you feel.

Facebook:  All smiles on the first day of school!

Reality:  Your teenager didn’t want to get out of bed and you lost your mind after telling the kids for the sixth time to put their shoes on.

Sure, it’s not all bad.  We have good times and do genuinely feel ‘Hashtag Blessed’ on occasion.   I would go one step further and say there are great memories tucked in our photo albums,  but it’s not always as it seems.  There are highs and lows.  There is laughter and tears.   That is real life –  and it will never be a Facebook status. 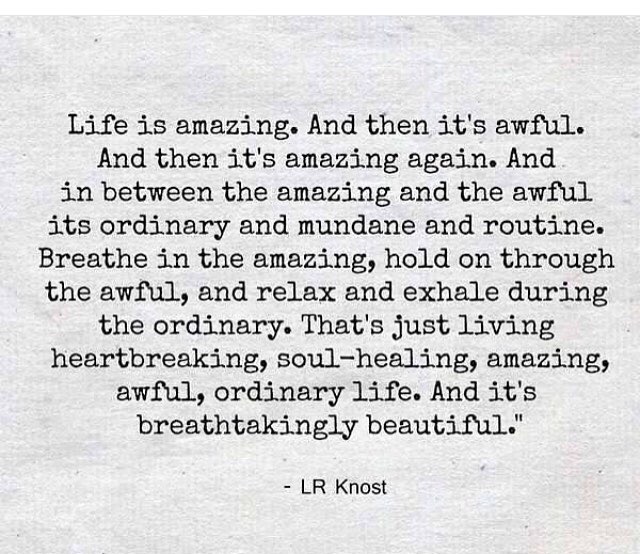