It is no secret that I love shopping at thrift stores. I bought my son a Fisher Price Kid Tough Digital Camera from Goodwill. I paid 99 cents. Score! Right? Yes, until your child discovers another family’s photographs on the memory card. My daughter was playing with the camera while my son was at school. I encourage them to share, but it is like trying to convince Jared to eat something other than a Subway sandwich. It’s not going to happen. So, she waits until he leaves to break his stuff. She took the camera into her room to photograph her baby dolls. Who doesn’t want a picture of Baby Alive framed on the wall? Then, she let out an audible gasp, “What is this?” I was down the hall, in my bedroom, because she told me I wasn’t invited to the party. It was like 8th grade all over again. “I love you Mommy, but get out of my room,” she demanded. Now, she was coming to me for help. Oh, hell no. I told her not to let the door hit her in the a** on the way out. I am kidding. “Mom, someone stoled (yes, that is past tense until the age of 5) the camera and took pictures.” I thought she was pretending. “Oh no,” I raised my hands to my face. “This isn’t a joke,” said my 3-year-old, sounding more like a teenager. She pointed to this picture:

Thelma had it all figured out, “That guy took our camera.” Clearly, she hasn’t watched a single episode of Law & Order. People don’t steal cameras, take pictures of themselves at a kitchen table and return it. They kill you and sell the camera on Ebay. She was not listening. “A lady did it too.” 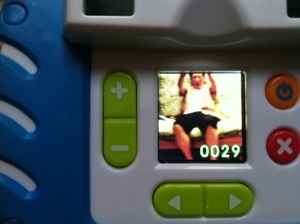 I am not sure what Aunt Sue is doing in this picture, but she should have deleted it before donating Billy’s camera. I had to explain that Mommy is cheap and bought the camera used. “That’s gross,” she said. Gross? No, gross is picking your nose and handing it to me like a trophy. “Mom, here, a booger.” Well, at least I don’t have to worry about her stealing her brother’s camera ever again.