Do you know what is awesome about having kids? If they don’t like something they just spit it out. It doesn’t matter where they are standing. They don’t care who is nearby. It’s like watching a sorority sister at her first college party. The only difference is there isn’t alcohol involved and nobody is holding their hair.

It is even better when you aren’t there to witness them spit out food. I found this in my son’s room yesterday. I thought there was a bloody battle over who a Batman toy. 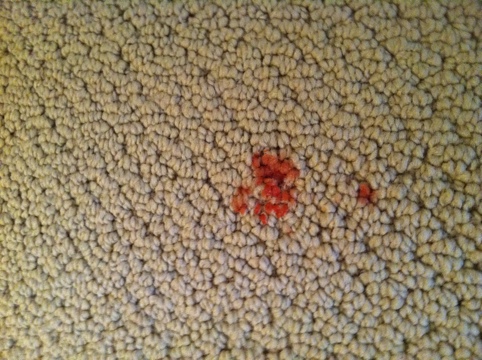 Nope. My daughter was in his room with a tiny red jelly bean in her mouth. She decided she didn’t like the flavor.

As kids get older they learn not to spit food on the floor. No, they don’t get a napkin or use a garbage can. That would be far too civilized. They wave their arms frantically as if hailing a taxi after committing a crime. (I have never done this, but I’ve seen it on TV) Thinking they are choking you rush to their aid only to have them dump a hunk of moist, partially chewed turkey in your hand. “I don’t like it.” Awesome!

One Response to Spit it out