There are people who brag about their children’s academic success with bumper stickers. Some people choose to publicly display their support for a presidential candidate. Then, there is this guy: 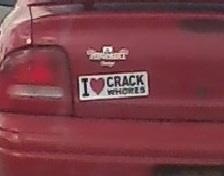 He loves crack whores, but who doesn’t? I’ve never really felt passionately about something to buy put a sticker and place it on my vehicle. Oh, you won’t the state championships in 1993? Guess what, nobody cares anymore. My favorites are the ones with little boys urinating on the logo of a rival car manufacturer. I would love to be in that guy’s head when deciding where to place it on his truck. Take that Ford! You showed them buddy. My younger son asked me why we don’t have stickers on our car. He thinks it looks cool. Then again, he can’t read. If he could he would know the sticker he admired said “The Guy Behind Me Is An Idiot.” Good one. I’m guessing by the bungee cord holding your passenger door closed you graduated from Harvard.