I’ve got an idea. Let’s invent a doll that coos and giggles. You can change its diaper and clothing. Your child can even feed it different flavors of packaged food and juice that requires mixing. Clearly, there were no women present in the “Baby Alive” board room. It is the dumbest idea I have ever seen. Well, it is a close second to Squishy Baff. Obviously the bathtub goo was created by Satan. By giving Baby Alive as a gift you are basically telling the mother, “F-you. Good luck with this mess.” I learned early on to immediately place those packets in the trash. As if taking care of three children isn’t enough. Now you want me to clean up after a talking, plastic doll? A doll without taste buds? A doll that doesn’t have a digestive system? It really pees and poops… Is that supposed to make me happy? To quote the late and great Whitney Houston, “Hell to the No.” Just because you put the word “alive” in the product name doesn’t make it true. This baby doesn’t need food to survive. I would advise selling the adorable doll without the packets. My daughter loves it. She is also okay with the fact that her baby is on an imaginary food diet. The doll seems happy too: 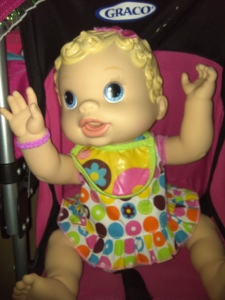