Have you heard about Jason Biggs’ controversial Twitter account? Of course you have because that’s all anyone is talking about. Apparently, his tweets are offending a lot of people. Nickelodeon says it mistakenly promoted his account while tweeting about the Teenage Mutant Ninja Turtles remake. (I bet someone is about to lose their job.) Yes, Biggs’ tweeting about sexually assaulting Paul Ryan’s wife is highly offensive. I’m not going to defend the guy on that one. It’s never funny to joke about rape. 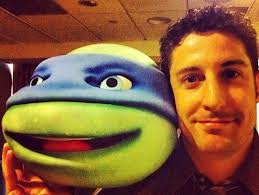 Some of his other tweets are equally as tasteless. As a parent you don’t want to hear Leonardo the Ninja Turtle use a synonym for kitty, but not be talking about a cat. However, Jason Biggs isn’t really a turtle. He is a comedian. I think you have to take some of his stuff with a grain of salt. Isn’t organizing a boycott of products that advertise on Nickelodeon a tad extreme? Guess what? You don’t have to follow Jason Biggs. I know, this social media thing is amazing! In fact, you can block him. If your kid is young enough to enjoy a cartoon about turtles I would dare say he/she isn’t old enough to have a Twitter account. Jason Biggs is best known for a movie where he sticks his penis in a pie. Did you expect him to tweet the alphabet?