MTV’s Teen Mom “star” Amber Portwood has released a statement from prison. If you haven’t followed her story allow me to sum it up for you.  She made a bad decision,  got paid to be on TV, made another bad decision and landed in the pokey.   I am kind of ashamed of myself for watching this show.  It was like a train wreck, but I couldn’t look away.   The cast included a spoiled brat, a teenager  in a relationship with a complete tool and Amber.  There was one other teenage girl and her boyfriend that you found yourself rooting for.  They gave their baby up for adoption and seem like genuinely good people.   Otherwise, this series taught me how not to raise children. They need discipline.  Sure, you can be the best parent in the world and your child could still go down the wrong path.  However, the parenting (or lack thereof) in this show was less than stellar.  To her credit, Amber, 21,  says she is dedicated to getting her life in order and being a mom again.  She lost custody of her 3-year-old daughter Leah.  If you want to know what Leah looks like just hand Amber some Mardi Gras beads.  She got this tattoo before going into prison. 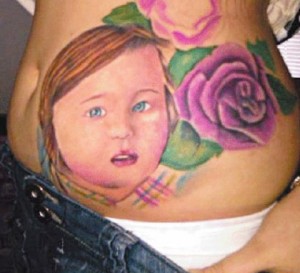 Here is a quote from Amber’s statement.

“I hope people look at my story and say, ‘That’s not the way I want to go.’ I know everybody looks at me as a mean person who cusses and hits people, but that’s not me. That’s just what I had to go through to grow up and learn.”