I know a lot of women don’t enjoy football. I happen to like it. However, despite what many men think, the earth does not stop rotating on Sundays. You cannot sit in front of a television all day. I know you feel like part of the team when you slip on that jersey. Your wife bought it at Walmart. It was probably on sale.

Don’t even get me started about fantasy leagues. You spend hours drafting a pretend team and there isn’t even a prize? Let’s pretend you are a repairman and fix the broken oven door.

Anyway, the reason football is on my mind is because of a woman named Shannon Eastin. Tonight she became the 1st woman in the NFL’s 97-year history to officiate a game. She got the job because of a labor dispute, but deserved it! Kudos to Ms. Eastin for breaking down barriers. I want my daughter to look up to women like you. Hopefully, she won’t aspire to be one of the chicks flaunting their ta-ta’s on the sidelines. Cheerleading can be a grueling physical activity. I was one for a few years in high school. I didn’t make the varsity team. My legs were like bricks. My Herkie looked more like a hop. At this level cheerleaders are just eye candy for drunken, overweight, sweaty fans. NFL players don’t need to be reminded to Be aggressive, B-E aggressive, B-E-A-G-G-R-E-S-S-I-V-E, aggressive. 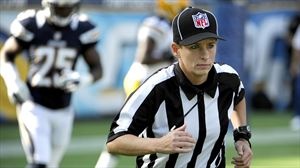