Here we go again. I will be making another trip to the orthodontist. My son knocked off a bracket. He has no idea how it happened. Oh, I don’t know, maybe it was the pretzels or gummy bears he snacked on while I slept. I don’t keep an inventory of food, but I am not stupid.

He complains daily about having to wear braces. He will thank me someday. I’m spending nearly six grand so he doesn’t end up looking like 75% of the people at the state fair. Besides, he is already 12-years-old and will have them off in a year.

Well, that is, unless he has a lousy orthodontist like the one in Oregon. Apparently, according to Fox News, some guy named Devin Bost, 22, wore braces for 11 years. Now, Bost is suing because his teeth rotted out of his head. Nancy Kerrigan’s gums look small compared to his.

I have to wonder if his parents could have intervened. You mean there weren’t any red flags? His breath must have smelled like feces marinated in rotten milk. The blood oozing from his gums didn’t seem alarming? Nobody noticed his brackets were attached to brown teeth or, in spots, none at all?

Bost has already spent $35,000 to fix the damage. He is suing for $185,100 which is quite possibly the most random amount ever. If I were a judge I would throw out this lawsuit. His ignorant parents should have gotten a second opinion when their kid started to look like Ren & Stimpy. 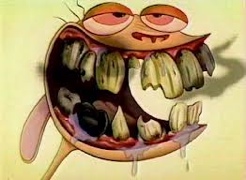