I was so busy with the BlogHer conference, playing with dolls and cleaning toilets (not necessarily in that order) I forgot to show you the greatest picture ever. I took my kiddos to the beach recently which, if you are a parent, you know is an accomplishment in itself. You have to pack food, towels, extra clothing, toys and beverages. Then, you have to cart it all back through the hot sand while carrying a whiny toddler.

We actually had a great time with my brother, sister-in-law and nephews. The water at the lake was the perfect temperature and clean. (We have an algae problem from time to time, but who doesn’t) The kids swam for hours, built castles and didn’t argue once.

They also got to see an old man in a Speedo build a sand sculpture. Bonus! He was an interesting fella. His skin was leathery; the apparent result of years of tanning. Patches of white hair were scattered across his golden bronze chest. He was wearing a tiny red and black bathing suit that could barely hold the weight of his testicles. He did create what I thought was an amazing work of art out of sand. Of course, that is until, three pubescent boys start gawking at it. The sculpture was a naked woman lying on her side. The younger children giggled because she wasn’t wearing clothing. The artist was so proud of his work he started doing handstands. True story. You haven’t lived until you have seen a 70-something man’s junk hanging upside down. Here is the photo I snapped of the “artwork” : 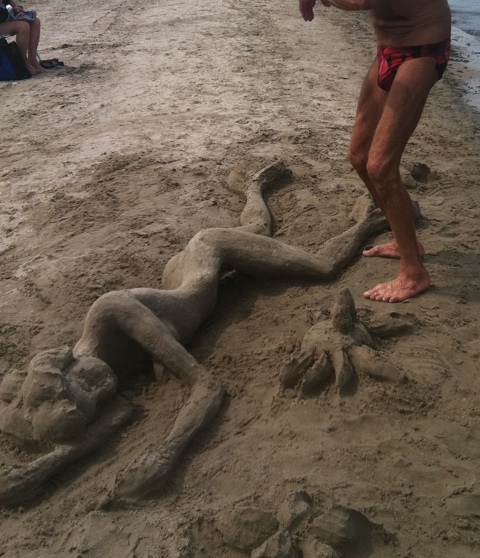