My 5-year-old is learning about Thanksgiving. His class completed a worksheet highlighting the differences between life back then and now. Clearly, he is going to be a historian. He focused on the most important difference: No Electricity vs. TV. Take note that he wrote “NO” twice to emphasize how the pilgrims must have suffered.

My son wasn’t afraid to admit, “I would have hated to live back then.” He wondered how the pilgrim children played video games. “They didn’t have IPods either?” Nope. It blew his mind to learn I didn’t have the Internet growing up either. At least we didn’t wear those God awful dresses and bonnets. Imagine how different Plymouth would have looked if Rachel Zoe were alive.

At least one thing has remained constant all these years. A turkey is still a turkey whether it’s eaten in the New World or U S of A. 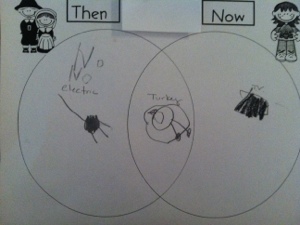