Walt Disney World is unveiling a new way to help you plan your trip. It is dubbed MyMagic+ and includes a way to get a FastPass before you arrive at the park. A FastPass is basically a ticket to cut in line. During our recent trip to Disney’s Hollywood Studios I didn’t get one for each attraction. Big mistake! My 5-year-old was furious when the cast allowed people with a FastPass to enter first. “Cheaters! Cheaters,” he chanted as if leading a protest. “They are budging! This isn’t fair!” He wasn’t phased by my “This is the happiest place on earth and we shouldn’t complain” speech. I would rather lick the ground in a barn than stand in line in the hot sun with whiny kids at an amusement park.

I was an adult when I visited Walt Disney World for the first time. I am in awe every time I walk through the gate. The best part of Disney (since I suck at family planning) is there is something for every age group. My soon to be 13-year-old had just as much fun as my 5 and 3-year-olds. We surprised our children with the trip for Christmas. We usually fly, but this year I drove from New York to Orlando, Florida. Yes, I have lost my mind. Unfortunately, flying during the holidays would have cost around five grand. That, my friends, is a set of braces. I don’t want my kids walking around with jacked up teeth, looking like one of Honey Boo Boo’s cousins. So, we hit the road. How did I do it? I brought an Ipad, Ipods, videos, coloring books, junk food and candy. The swagger wagon smelled like a frat house by the time we hit South Carolina.

It was worth it. If you have never been to Walt Disney World during the holidays put it on your bucket list. The decorations and lights were breathtaking.

After a long day at the park we spent the next afternoon at the pool. I am training to be a contestant on “Stars in Danger.” I’m kidding, but did you see that show? A bunch of celebrities competed in a diving competition. Since when is a pencil jump considered a dive? My son had better form than JWoww. She needs to stick to getting drunk in dive bars in New Jersey. Anyway, I won our splash contest. There is always next year kid. 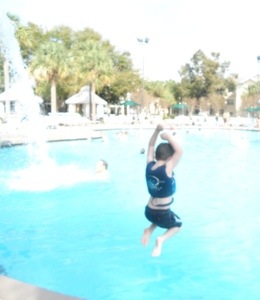 We spent Saturday at a local amusement park. It’s no Walt Disney World. The only show we saw starred three scruffy men pretending to be drunk and shooting each other. Magical. There are rides for all ages which is important when you space your oldest and youngest child 10 years apart. 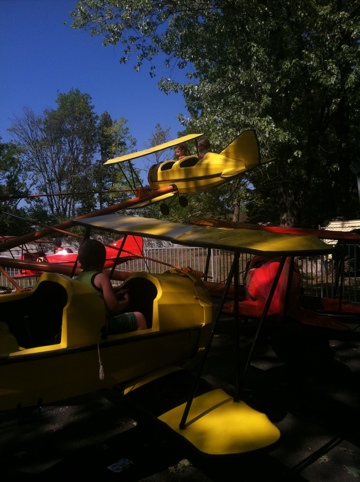 There were just a few tears when my 5-year-old couldn’t ride with his older brother. The guy at the roller coaster took his job seriously. I’m pretty sure my son was a centimeter too short. I suppose better safe than sorry. 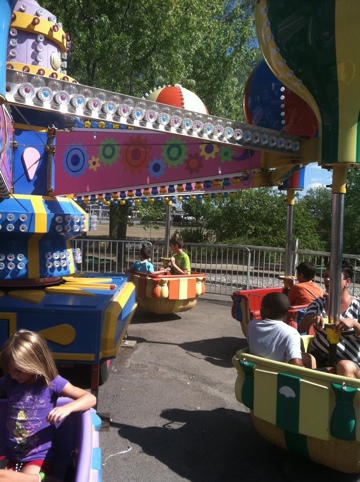 At this point we decided to hit the water slides. An amusement park is really the only place I feel sexy in a bathing suit. Most of the women strolling around are fellow mothers. It’s like a cat walk of stretch marks. The models earned each and every red squiggly line.

I think what I hate the most is having to step foot in the changing rooms. As my daughter put it “Disgusting! This place smells like poop and pee.” It was horrendous. If I were alone it would have taken two minutes to get changed. With a 2-year-old is takes much, much longer. She wants to have a conversation about everything. “Is that my bathing suit?” “Is it green? It’s pretty.” “Is that a door?” “Is this a carnival?” By the time it’s my turn to change I’m hot and on the verge of vomiting. Her questions get even better. “Is that your bathing suit?” “Why is your hair brown and mine yellow?” “Are you sweating? I’m hot too.” “Are those your boobs? They are big.”

The reward is wading in a wave pool that, no doubt, children have urinated in. Then, you get follow a man with yellow toe nails into the lazy river. Still, seeing my children happy was worth it. Their laughter was contagious. They even declared it to be “the best day ever.” Well, until we got home and my son didn’t want to go to bed. Then he informed me that he “didn’t need me as a mother.” I would like to see him try and microwave dinner himself. He needs me.