My daughter woke up this morning and declared, “I got an idea.” Her ideas are usually not good ones. Well, they are for her, but not so much for me. “How about we get some chips and dip?” For breakfast? I was not going to start the day with a tantrum.

I leave tonight for a girl’s weekend in New York City. A good friend is getting hitched. In the next two days I will be able to enjoy a cocktail, eat a hot meal and have an uninterrupted conversation. I’m going to do my best to suppress the mommy guilt. I love my children more than anything, but I spend 24/7 with them. I think they would agree we need a break. In fact, yesterday they would have packed the bags for me. I lost my mind in the minivan. If that isn’t a country song it should be. My daughter had been crying for 30 minutes straight because she wanted to play chess. She isn’t Bobby Fischer. She wanted to pretend the pieces were people, but her brother and cousin were playing an actual game. I was sleep deprived, had a headache and suffering from PMS. On our way home my daughter was screaming and her two older brothers were fighting. An episode of SpongeBob was in the DVD player. This is more torture than water boarding. Then, my lovely toddler chucked a toy at my head. I started crying like Sally Field and yelled, “Stop it! Stop it! Stop it!” so loud I actually spit on the windshield. Another mother, parked beside me at the stop light, gave a sympathetic look. I’m sure a person without children would have called social services. Silence fell over the minivan. The kids didn’t say another word until we got home.

This weekend they will get to play with Dad, eat all the junk food they want and stay up late. The wicked witch is leaving and Glenda will return on Sunday. So yes, I gave my daughter chips for breakfast. She was clearly happy. I will be in about an hour. 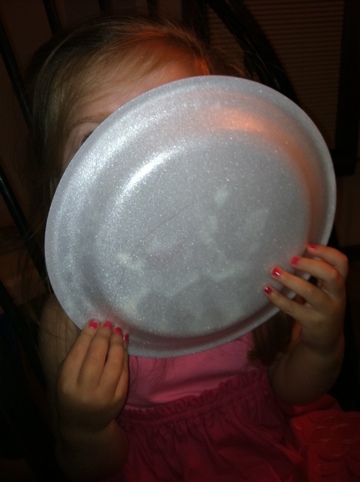