I spent Friday night playing with Play- Dough. That is something I never said in my 20’s. I don’t want to brag, but I made a killer Play-Dough pie. It was wicked awesome.

I put my daughter to bed and decided to hop on the treadmill. Nothing screams “I’m not cool anymore” like power walking while 20/20 is on TV. Television network executives have decided to make us laugh Monday through Thursday and scare the s**t out of us on Friday. Freddy Krueger has nothin’ on Dateline.

I was rocking out to Ace of Base when I got a text message. 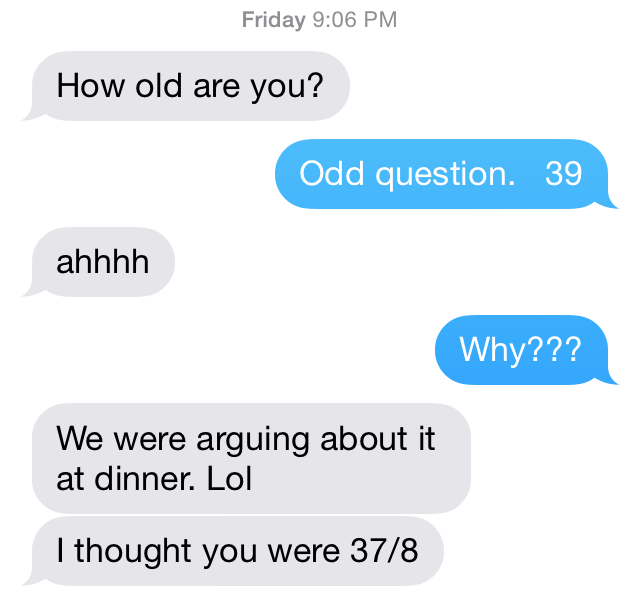 A few friends were enjoying a night out when an argument ensued. I wasn’t invited to dinner, but apparently I was the topic of conversation. Were they discussing how kind I was? Were they admiring my wit by sharing funny stories?The answer is (C.) none of the above. They were talking about how f**king old I am. Thanks to vodka, they thought it would be a good idea to text me to see who was right. I want to know which person said, “No way, that b**ch is way older than 37! She has deeper wrinkles than a Shar Pei!” Note to self: hit up the laboratory at the hospital around 6 a.m. tomorrow and find a new posse.

I’ve become the subject of a game at a carival midway. Next week the person who guesses my weight is the big winner. The prize is a giant stuffed Tweetie bird, feather clip or Ace of Base poster.