I thrive on spontaneity.  I’m not as spontaneous as the woman who flashed her breasts  when the Washington Capitals won the Stanley Cup. Her parents must be so proud. I often plan road trips days or even hours in advance. When I found out the New York Yankees were playing in Toronto last Wednesday I scouted several websites for tickets that morning.  I found three seats in section 113, Row 1 – which is in right field – for just $30 a pop.  People pay five times that for an dose of Botox. At least that’s what I have heard.

I scooped up the tickets faster than President Trump can misspell a word in a tweet. My kids squealed with delight when I revealed the surprise. Then, since we don’t live in Facebook’s parallel universe, they continued bickering.

I am always nervous when I cross the border. You would think I am smuggling drugs into Canada. The worst thing I have in my car is an old gummy bear and a few smashed fish crackers under the backseat.  My daughter tried inning after inning to get a baseball from Aaron Judge. He throws a practice ball out to the crowd every inning. Let’s just say her glass was half full. “I’m never going to get one.” I tried to be the optimistic mom, but deep down I didn’t think it would happen either.

I was wrong. Her dream came true at the bottom of the 8th when Judge tossed her the ball.  It bounced, in what felt like slow motion, missed my daughter’s glove, hit the edge of her seat and landed in the row directly behind us. A man in his late 30’s picked it up like he made the game winning play in the World Series. I whipped my head around and shot him a glare that light wood on fire.  In this case, it was the “if you don’t give my daughter that ball I will beat you down” look.  It took him two seconds to fork the ball over. In all seriousness, we were sitting with a great group of people who were rooting for my daughter the entire day and erupted when she finally got the ball in her hands.  My daughter was so happy she began to cry.

Judge also threw a ball to my 11-year-old son. His face lit up. Judge smiled back and pointed at him. There are players who don’t even pass a glance when young fans shout their name. I have been to a number of games and Aaron Judge is always a class act.  He has said in interviews he wouldn’t be a Yankee if it wasn’t for his mother, Patty.  Among other things, he said, she taught him “how to treat people.” She should be proud. 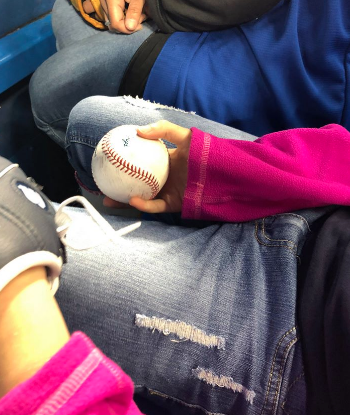