There was a Mother’s Day celebration at my daughter’s school. She presented me with a paper corsage at the door. The class gathered in the front of the room and sang songs. They did a remix of “Bingo Was His Name-o” replacing the dog with “M-O-T-H-E-R.” It has an extra letter, but didn’t mess up the rhythm. MIND BLOWN. You have no idea how many of your favorite childhood songs pre-schoolers can edit. I must admit it was really precious. The teachers work so hard to make this day special. I can’t teach one kid to sing the correct lyrics to “Let it Go,” let alone teach 20 children to sing n’sync. My daughter refuses to believe the past isn’t in the “car.”

Honey, it says “the past is in the past.”

Then, I realize I am arguing with a person who thinks she met “the real” Cinderella and the conversation ends. I would like to say “Well, if you want to look like an a**hole in front of your friends go ahead and keep saying car.”

Why would a girl who was locked in a room for years while nobody called the police, who has the power to freeze everything and sings like Adele Dazeem put the past in the car? That doesn’t even make any sense.

The party was great. Each child made a garden stone with his/her handprint. They also drew our portraits. This is where things got interesting. The pictures were placed in the hallway and numbered. We had to try and guess which one our child drew. There was ‘Frankenstein Mom’, ‘Mom with no body’ and ‘Manly Mom.’ Then, there was this: 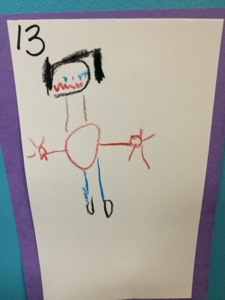 Who was ‘Angry Mom?’ Nobody wanted to claim ‘Angry Mom.’ “Oh, what the hell. I bet it is me,” I said. We all laughed, but I was a little nervous. Did my daughter see me that way? I won’t pretend I don’t yell. I am not proud of it, but that’s life. Sometimes you lose your mind, spraying the room with spit while trying to tell everyone to calm down. 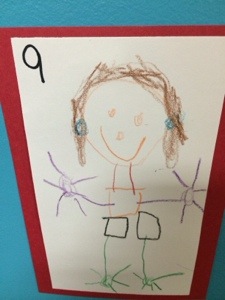 It turns out I wasn’t either. I actually like the real ‘Angry Mom.’ The truth is ‘Perfect Mom’ only exists on paper.