We discovered a bird’s nest yesterday while trimming an overgrown shrub near the house. Nestled inside were three baby birds. My 2-year-old daughter wanted to take them to her room. “Those are MY birds.” Everything is hers nowadays. My older son passed gas and she declared, “I farted.” I’m hoping she will learn that, as a lady, you never admit to that. You definitely don’t claim someone else’s.

She finally accepted the fact that the birds were not her own. However,
she could not believe the mother bird wasn’t watching the babies. (Clearly, she hasn’t seen Home Alone. This sort of thing happens all the time) I explained that she was probably out having a Margarita with the other mommy birds after cleaning all day, being a chauffeur and listening to hours of whining.

It’s funny how little girls are inherently nurturing. My boys thought the nest was cool. Then, without a care in the world, ran off to play with water guns. My daughter refused to go anywhere until I told her exactly when the mother was coming back. Um, 8 p.m.? How the hell do I know a bird’s schedule?

My little princess began to sing “You Are My Sunshine” to the birds. I sing this song to her every night. Well, except for the nights when she smacks me in the face because she doesn’t want to go to bed. Aren’t the terrible twos great? The mommy bird came back moments later. My daughter smiled and agreed to go inside. She grabbed her favorite baby doll and gave it a great big hug. Then, she chucked the baby against the wall. All was right in the world. 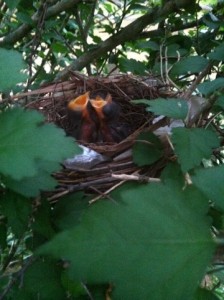