How long does it take to drink a glass of orange juice with a spoon? In my house the answer is 5 minutes 6 seconds. I learned this interesting fact today. My 3-year-old daughter cried when I poured juice into her favorite cup. She drinks o.j every single day out of the exact same cup. Why did it piss her off this morning? She has the toddler version of PMS which lasts a lot longer than a week. She didn’t want a straw instead demanding I feed it to her with a spoon. I know experts say you aren’t supposed to give in to temper tantrums. It was early and I was tired. I stayed up late watching The Hunger Games on Netflix. It was my husband’s idea. Quite frankly, I don’t get why people are so fascinated with this film. The concept is nothing new. If you locked my 3-year-old and 5-year-old in a room without adult supervision and one bag of chips you would have the same outcome. My point is I was up past my bedtime and just wanted my daughter to be quiet. So, I fed her orange juice with a spoon. (After she had a blue Popsicle, but that is another story.) 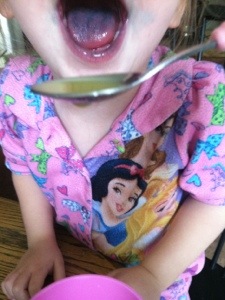 Do you know what’s more annoying than a tantrum when you’re tired? A toddler clanking her teeth on a spoon. It was still worth it because she gave me this in return: 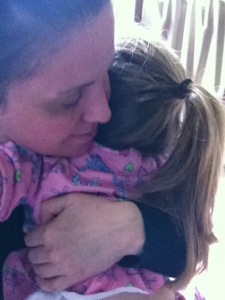