Fathers are lucky bastards. They don’t have to suffer through 9 months of pregnancy or a painful labor. They don’t get stretch marks or a kangaroo pouch that won’t go away with crunches. Yet, they get to enjoy the joy and beauty of being a parent. They don’t even have to put much thought into gifts. Retailers basically draw them a damn map. If they forget a holiday a simple stop for flowers and a mushy card will suffice. (or will it?) On Mother’s Day I got the same damn bouquet (bitter? Maybe.) that thousands of other women received. Wallymart anticipated a rush of men making the last minute dash for gifts. There was a giant box of flowers and rack of cards near the front door that required little effort. I actually put a little more thought into his gift. The kids signed the card even though they don’t have jobs and clearly couldn’t afford it. Now, had I bought something from The Father’s Day display near the front door at Wallymart the father of my children would be walking around in this: 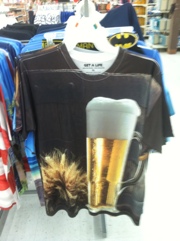 Classy. This shirt says “You’re an alcoholic dad. Thanks for choosing beer over my happiness all these years.” 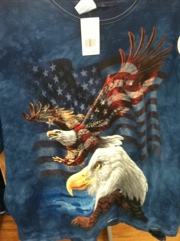 For the dad who loves eagles and flags. (I mean, who doesn’t?)

We also went to a Father’s Day pancake breakfast this morning. It was at our local airport. (I cooked on
Mother’s Day. The kids argued. I ironed, cleaned and did laundry. This despite pleas to relax on “my day.”) However, today my husband slept in and got to savor each bite of his breakfast. The kids watched the planes land while they ate. Distractions are awesome! Later, they played in our backyard, giggling and laughing. My 2-year-old daughter declared, “You’re the best Dad ever.” It was a perfect day. Lucky Bastard.