I stood outside in 30 degree weather to get a photograph with a celebrity. I thought rock bottom was plucking a chin hair in a minivan. I was wrong. It’s being the 39-year-old woman waiting near the stage entrance of a local theater. How the f*ck did this happen? Well, the short answer is: I had unprotected sex 15 years ago and didn’t abort.

I surprised my teenage son and nephew with tickets to see the Impractical Jokers live show. The comic group “The Tenderloins” is a bunch of guys who met in high school.
Their relationship runs a little deeper than the guy you friended on Facebook because you had Science together in 9th grade. They were best friends who did stuff and ended up on TV. (I’m not a G*d damn biographer. If you want more information Google it.)

They have a show on Tru TV. What the hell is Tru TV? I asked the same question when my son introduced me to this series. It’s a cable channel somewhere on the dial….. if we still had dials. My kids wouldn’t have lasted a second in my Keds. I actually had to walk to the TV to change the channel or turn up the volume. They don’t know how good they have it.

“Impractical Jokers” is a hidden camera practical joke show. Don’t worry, Ashton Kutcher does not jump out of the bushes. My son is obsessed with this series. Growing up, we had “Who’s the Boss?” They watch a group of grown men play truth or dare, minus the truth option. They are not Tony Danza, but the show is pretty funny. Their live standup performance was hysterical. I actually laughed so hard I had tears in my eyes. More importantly, my son was happy and thought I was cool. Impressing a teenager is like meeting a Kardashian who is a virgin. It doesn’t happen.

By the time the show ended it was well
past my bedtime and I had to pee, but I couldn’t quit. I was so close to getting another #1 mom mug. So, I told the boys we could wait outside and try to meet the jokers. They had to leave at some point. We had them cornered. There were about ten other people waiting, too. Four days later, two of the guys (Joe Gatto and James Murray) finally came out. They made up a “dog ate my homework” excuse for why the other two (Sal Valcano and Brian Quinn) did not. “They left already.” First of all, it is “They already left.” Second, you’re a liar, but forgiven because you were kind enough to take pictures. As for the other guys, that was a d*ck move. Don’t underestimate the power of teenagers. If a single tweet by a high schooler can make Alex from Target famous, it can do damage, too. Check yo’ self before you wreck yo’ self. You’re not Elsa. There wasn’t a long line of people. It would have taken 10 minutes.

No, I don’t know what it’s like to be stalked by middle aged women and pubescent boys. However, I did have a little girl ask me for my autograph once while covering a homicide for the late news. That is uncomfortable. If you don’t want fans then go work at a gas station. Nobody is asking the guy who put $10 of unleaded into a hybrid for his John Hancock.

I exaggerated slightly. We didn’t wait four days, but it felt like it. I was standing near an older woman who was pissing her pants every time the door opened. Perhaps, literally. She wanted an autograph. What’s the point of an autograph anyway? They don’t even teach cursive in schools anymore. In a few years autographs will be studied like cave paintings.

The boys were thrilled to get photos with James Murray and Joe Gatto. They seemed like really nice guys; especially Joe. Since my teenager refuses to allow me to post his picture on the blog, I decided to snap a selfie. 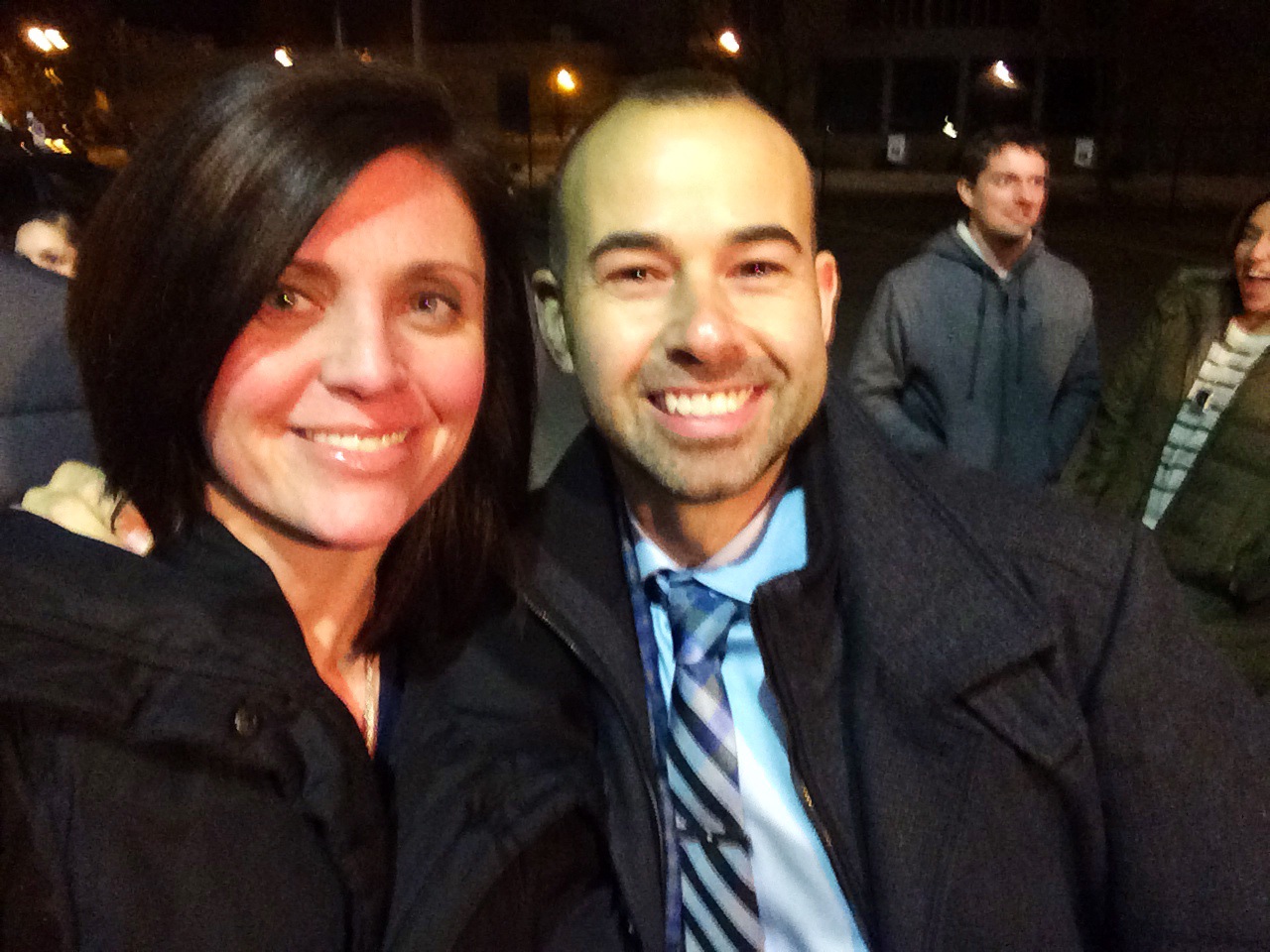 These guys are my age. What the hell am I doing wrong? I still don’t know what I want to be when I grow up. “You’re a good mom,” my husband said when we arrived back home. “This is a something they will never forget. They will share this memory at your funeral.” Well, I suppose I have that to look forward to.