I have to give my two cents on these news stories. Actually, to quote the great Eminem, “Here is my ten cents, my two cents is free.”

Iowa Woman Has Twins, Didn’t Know She Was Pregnant

Another story of a woman who claims she did not know she was pregnant? I have to call bullsh*t on this one. This woman was not overweight and nearly 9 months pregnant with twins. Yet, she didn’t have a clue? Sure, doctors said her appearance didn’t change drastically, but she must have gained some weight. I looked like a beached whale in the third trimester. Let’s pretend she didn’t gain a pound. There are many other signs that you are pregnant. The last month is hell. Your vagina feels like it is going to fall off. The pressure is unbearable. You’re tired, ankles swell and your breasts are like rocks. Again, let’s pretend she didn’t have any of these symptoms. She wasn’t suspicious when her menstrual cycle was out of whack? It didn’t strike her as odd when she felt little feet kicking her womb? I smell a guest appearance on Maury Povich in the near future.

Hospital Worker Who Handled Ebola Samples Is on Cruise Ship

What the….what? I know people are blaming the media for causing hysteria about Ebola. I think there is good reason to fear a disease that causes you to bleed out of your eyeballs. Is it so much to ask that if you were around someone who had Ebola that you postpone your vacation? A healthcare worker who handled Ebola specimens decided to go on a cruise. How pissed would you be if you were on this boat? The ship was forced to turn around because Belize said “Hell to the no, you cannot dock here.” A country where you are warned about drinking the tap water isn’t playin’ with Ebola either.

The second nurse in Dallas who contracted Ebola went on a trip to Ohio. It turns out she may have shown symptoms earlier than originally thought. If this spreads any further ignorance is to blame.

The town I live in hosts a contest every year for the “County Dairy Princess.” Organizers say the winner “works tirelessly to promote a positive message about dairy.” Apparently dairy has a bad reputation that needs repairin’? Our “Dairy Princess” could kick “Miss Hitler’s” a**. It scares me that someone thought this was a good idea. It scares me even more that women have entered the contest.

It turns out he isn’t a douce bag. Bono can’t see. I feel bad for him. I still don’t want his album on my iPod, but I feel bad. 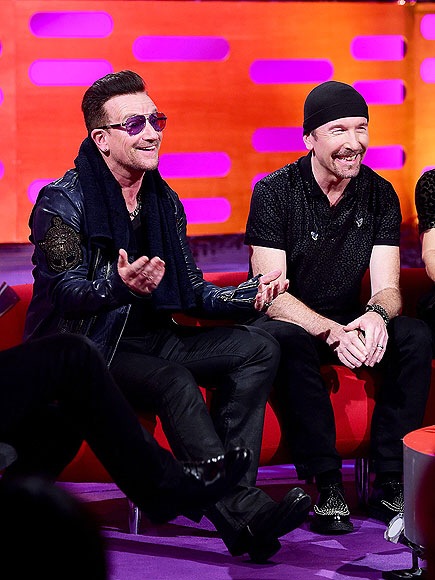 Capital One is already sending out a pre-approval letter. Slow down, the president doesn’t need your $250 line of credit just yet. Yes, his card was declined at a fancy/schmancy restaurant in New York City, but
President Obama has an explanation. “I was trying to explain to the waitress ‘No, I really think that I’ve been paying my bills,” he said. Clearly, he isn’t paying down the national debt. Thank you. I’m here all night.

His card wasn’t declined because his bank account is dry. The credit card company shut it down because they thought someone stole it. A red flag went up because he never uses it. Another perk of running a nation is eating for free or using someone else’s line of credit to foot the bill. Michelle Obama came to the rescue and pulled out another card. Thank Goodness, I would hate to see riots if they had to wash dishes.