Some lessons are taught and others come with experience. There are so many things that seem like a good idea when you’re a parent, but they’re not. Here are just a few:

1.) Picking the car shopping cart.
It seems like a fun way to take the kids along on a shopping trip. It is not. If you have two children they will inevitably fight over the seating arrangement. The cart designer thought he would prevent that problem by putting two steering wheels on the dashboard. Silly cart designer. Thankfully, the cart is easy to maneuver down the narrow aisles at the grocery store. I’m just kidding. It is like driving a tractor trailer – only grandma is on the road in a hoveround and she isn’t letting you pass. Eventually, your child will want out. Now, you have to navigate the giant cart while leading a parade through the freezer section. Plus, you don’t have enough space for your groceries.

2.) Asking “Who wants to go first”
It seems obvious, but we have all done it. Of course, everyone wants to go first. What’s fun about being second? To quote the great rapper Nelly “Two is not a winner and three nobody remembers.” You made being first sound really exciting. Now, they won’t even entertain the idea of going at the same time. They will fight and cry until you choose which child gets to go, realizing the other will need therapy later in life. I’ve also used candy as bribery.

You’re on the way home, your child is tired and you’re tired of listening to him/her whine. A quick nap in the car couldn’t hurt. It won’t if you are okay with pulling an all nighter. That kid will get a second wind that will blow your mind. You will make this mistake once or twice. Then, you will do everything humanly possible to keep a child awake. That includes talking in a really loud voice, pouring sugar down their throats, blasting music and rolling down the windows in the winter.

4.) Going to an amusement park when the temperature is over 80 degrees.

Do you know who that will be fun for? Nobody. The kids could be at the Happiest Place on Earth and will still complain about the heat. “I’m hot.” “It’s hot.” “I’m sweating.” So, you lose a fortune, your lunch and your sanity.

5.) Play board games
In the commercials the family always looks so happy. Nice try Milton Bradley. Let’s see that same family after the kid picks the Plumpy card when he is almost at the Candy Castle. Show me a 4-year-old whose mantra is “You win some, you lose some” and I will show you a pig that flies. 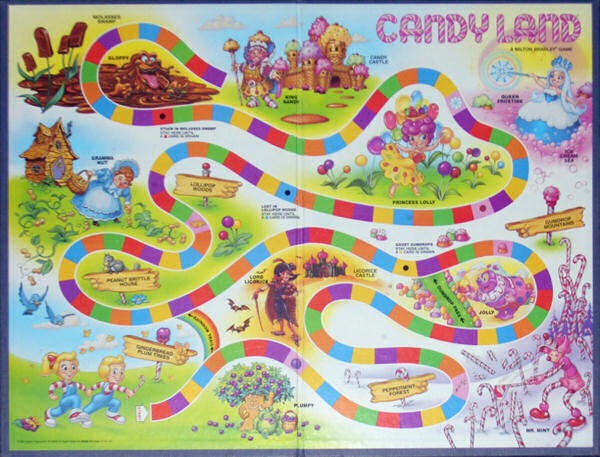 6.) Buying one of something and telling kids to share

You go to the movies and buy one large bucket of popcorn. “We can share,” you announce cheerfully. Children will keep track of every bite; even if they haven’t learned to count past 10. “She is eating it all!” “He ate more than me!” “That’s not fair, I want to hold the bucket!” Always get each child their own. I don’t care if you have to work the street corner on the weekends to pay for it. You will be f**ked if you do and f**ked if you don’t.

7.) Purchasing a doll that talks or eats “real food”

Don’t be fooled by the description on the box. It should read: This toy will make you pull your hair out.

The only thing worse than a colicky baby is a plastic colicky baby. I have turned into Sid from Toy Story, cutting dolls open to remove the sound box.

As for dolls that eat, do you know what happens to the “food?” Nothing, because they don’t have a stomach to digest it. It’s a damn toy. The slop coats the doll’s chest cavity and eventually smells like feta cheese. Then, you have to perform another surgery to get it out.

8.)Driving a car with built in TV.

It seems like the greatest distraction ever. You envision long, peaceful road trips filled with laughter and joy brought to you by Walt Disney. You don’t think about the arguments that will ensue over what to watch. You don’t think about the fact that you will hear the same movies over and over again. You will have them memorized, be able to recite the script in your sleep. You will never get to listen to the radio. It will get so bad that you will actually long to hear a Ke$ha song.

9.)Buying a toy with more than 2 pieces

Little Tommy asks Santa for a toy with 150 pieces. You are going to earn that #1 Mom or Dad coffee mug and make his dreams come true! In fact, you get up at 3 a.m. on Black Friday to buy one. Big mistake, Huge! You will spend hours putting that sucker together and do you know what will happen? Tommy will break it apart in less than 24 hours.

10.) Giving your child a sibling

When the second baby is in utero you fantasize about the beautiful relationship your children will have. They will always play nicely together. Actually, they will be best friends. Ha! Did Jan teach you nothing? They will fight. They can and will bicker over anything and everything. My daughter was mad at my son for flushing her poop. It was hers, not his. He gets to do everything. I love him more than her. Marcia, Marcia, Marcia.