My 5-year-old came home from school on Friday fired up about a story he heard. I wish I would have recorded this conversation. I tried to get him to retell it to no avail. He isn’t a puppet.

Honey, it is Martin Luther King Jr. He was a civil rights activist.

“Do you know what the bad guys did? They blew up his house and ruined all their toys. So, the bad guy still wanted to hurt Martha Luthor King so they shot him in the head. And then he died. Isn’t that sad Mom?”

“But you know what Mom? Because of Martha Luthor King we can all go to school together and that’s a good thing.”

He may not be good at remembering names, but he got the message and that is a good thing. 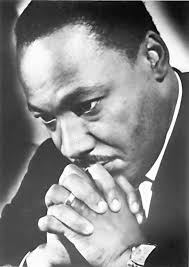