Oh no she didn’t.

I do not condone violence, but I chuckled when I read this news headline. 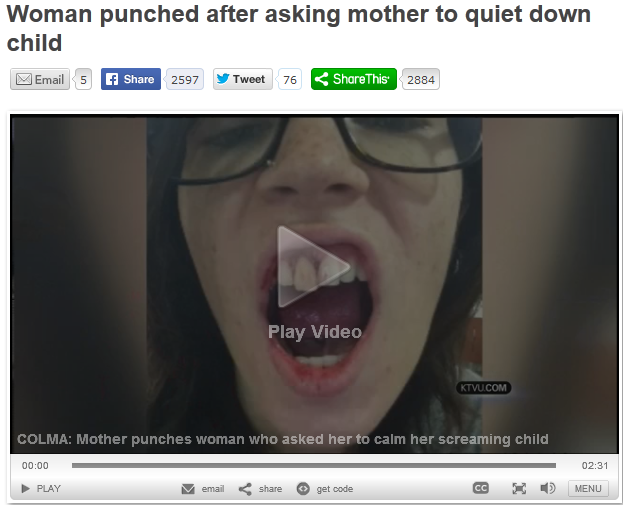 There are things you do not say to a parent; especially a frazzled mother. This is one of them. Clearly, this nosy woman doesn’t have any children. There is not a parent in the world that hasn’t carried a child out of a store, doctor’s office, amusement park, etc. kicking and screaming. You could be the greatest parent in the world and your child will still act like an a**hole from time to time. A sweet toddler can turn into Carol Anne within seconds. I have abandoned a cart full of groceries to remove a crazed child from the store. I was sweating profusely while, with clenched teeth, demanding better behavior, “You stop it right now!” Ventriloquism is a little hidden talent mothers have. We could probably recite the Declaration of Independence without moving our lips.

I don’t need a woman wearing leggings that are one size too small judging me. If I had the superpower to calm a child mid-tantrum I would be a very wealthy woman. I would also have my own reality show and a hairstyle from the 1990s. Did this woman think the mother wanted to hear her child screaming?

Here is the news story:

Colma police are looking for a mother who allegedly beat up a woman who told her to quiet down her screaming child.

According to police 20-year-old Bree Hajek-Richardson was shopping at the Nordstroms Rack in Colma when she saw a child screaming, having a “tantrum,” in a shopping cart at the checkout counter.

According to police 20-year-old Bree Hajek-Richardson was shopping at the Nordstroms Rack in Colma when she saw a child screaming, having a “tantrum,” in a shopping cart at the checkout counter.

“It wasn’t bothering me, (the tantrum) but it was just the volume was a little bit loud,” explains Hajek-Richardson, “it was hurting my ears so I asked her very nicely to calm her child down a little bit, you know the volume.”

But the mother apparently didn’t appreciate the request and according to Hajek-Richardson the woman got angry and started raising her voice.

The entire encounter inside the store, according to Hajek-Richardson lasted about two minutes and ended after, “I tell her to go to hell and she said I’ll see you there.”

She says she thought that was it, but when she went outside she says heard that same mother’s voice.

“I hear her (say) ‘so where did you tell me to go?’” explains Hajek-Richardson, “I said, ‘I told you to go to hell’ and the next thing I know she hits me with the fist and then hits me again and lays on top of me.”

She says the woman eventually got up and took off.

Children don’t come out of the womb knowing how to behave. You have to teach them not to scream or hit and until they are trained they will scream and hit. It’s another chapter missing from the “What to Expect When You’re Expecting” book series. You will be humiliated in public when they cry and scream. You will also, at least once, get smacked in the face by a toddler in front of strangers. They are like little Mike Tyson’s, minus the appetite for ears.

So, don’t judge or lecture us. My advice to you would be to look the other way, plug your ears or shop online.