My New Year’s resolution is to finally throw out the Halloween candy in the cupboard. This isn’t going to be easy. It’s difficult for me to let go of perfectly good Tootsie Rolls. Sure, it takes longer to chew 6 months later, but it’s still good.  Two things will survive the apocalypse:  1.) Tootsie Rolls  2.) Peanut butter on a spoon in a sink of water.

I no longer hit the club or put on a gown to party on December 31.  Instead, I binge on high-calorie food with my family. There is no better way to end a year than with laughter and heartburn. Then, we watch musicians lip-sync, Ryan Seacrest admire Ryan Seacrest and Jenny McCarthy scream in stranger’s faces on Dick Clark’s New Year’s Rockin Eve.

We went around the table last night and asked each of our children what they would like to change in 2015. My 5-year-old daughter’s New Year’s resolution is to move Christmas to summer.  It would be more convenient for her if our Lord and Savior was born during warmer weather.   Then, she can open presents and ride her bike on the same day.   I recommended my oldest make a resolution to spend less time using electronics.  He looked at me like I told him we were moving to an Amish community.

I will tell you who needs to make a resolution for 2015: Hasbro and parents who overreact.  Did you see the story about the Play-Doh toy that looks like a penis? 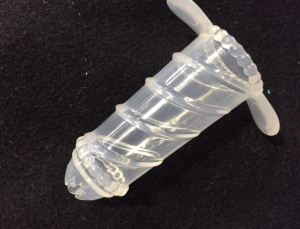 The plastic icing topper came with the Sweet Shoppe Cake Mountain playset.  The headlines were ridiculous.

Is it bizarre that the design of this toy made it to production? Yes.  Hasbro needs to stop hiring frat boys as designers.   Do I think a child was actually traumatized by this phallic-looking toy? No.  I doubt a single child made the connection.   If it ruined your Christmas you need to move to the Amish community with my teenage son.   The “outraged” parents interviewed in various articles need to chill out. Unfortunately,  a study shows only 8% of people people who make New Year’s resolutions actually reach their goals.   So, I am guessing an uptight mother will start a change.org petition calling for Hasbro to shut down.   I doubt she will be buying her children Hasbro products for Christmas next August.