I’m not going pretend to be holier than thou. I am not perfect, but will never admit it to certain people. I am not always politically correct. I do, however, know the difference between right and wrong. This is wrong: 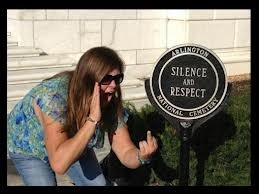 This woman is from Massachusetts and has been called, “the most hated woman on the Internet.” In the photograph Lindsey Stone, 30, appears to be screaming and giving the finger near a sign in Arlington National Cemetery that reads “SILENCE AND RESPECT.” The only thing funny about this picture are her pre-1993 acid wash jeans. I have to question whether she has any real friends. A real friend would have told her she was being an asshole. Maybe she is a good person who made a horrible decision. I made a horrible decision once to get a haircut at the mall. I walked out looking like Dorothy Hamill.

This chick lost her job at a non profit agency over this scandal. She posted the picture on Facebook and it went viral. Proof that not all Facebook “friends” are really your friend. Someone saved and shared her photo making a private posting very public. You may want to think twice about accepting a request from the guy you talked to once in the hallway in 9th grade. It could come back to haunt you.

Miss Stone issued an apology for her behavior. Perhaps she should visit Walter Reed Army Medical Center and apologize to the comrades of the men and women she disrespected.