My 6-year-old will never forget his first NFL football game. I am certain of that because he was completely traumatized.

He was grinning ear to ear when we pulled into Ralph Wilson Stadium. “There it is! There it is!” My husband gave me the we are awesome parents nod. Damn straight. We are creating memories. We arrived early to do some G rated tailgating in the parking lot. We played football and binged on junk food. My husband woke up early to pack the supplies. Ha! I am kidding. Seeing a man get anyone, but himself ready for a family outing is like coming face to face with a unicorn. 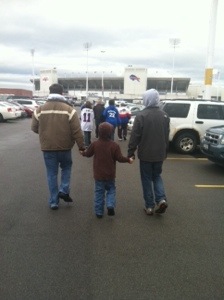 There was an audible gasp when my son saw the field for the first time. It was magical. My husband has been a Buffalo Bills fan all his life. This moment made all those painful years (wide right) worth it. 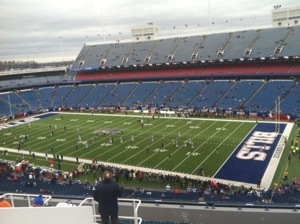 It was an exciting game. The Buffalo Bills had some great plays. We cheered and laughed. Then, it got really rowdy. Listen, I am not naive. I realize people drink alcohol at football games. I expected to hear a few curse words. I wasn’t prepared to sit in the front row of the Ultimate Hillbilly Fighting Championship. Apparently a New York Jets fan looked at an inebriated Bills fan. So, obviously the Bills fan had to punch the Jets fan in the head. Then, their friends got involved and a mini riot ensued. My terrified first grader started to cry.

What did you expect bringing a child to a football game?
I expected people to act like civilized human beings. I now realize that is an unrealistic expectation of someone sporting Zubaz, face paint and a clown wig.

I was pissed. So, when, about 30 minutes later, a bunch of girls nearby started bickering I intervened. I approached one of the 20-somethings near the concession stand. “Excuse me, I am sitting behind you with my children. If you so much as look at that other girl wrong I will have security drag you and the other Snooki look a likes out of here.” They apologized and barely spoke the rest of the game. Yeah, I am a buzz kill and proud of it.

It is the time of the year when men focus on something other than sex. Football. Unless you live under a rock you know today is the season opener for most teams in the NFL. I am not your stereotypical woman. Oh, don’t get me wrong I complain every Sunday. I am different in the sense that I actually enjoy watching football. However, the earth I live on doesn’t stop spinning at kickoff. I still have to take care of our three children. One may need food in the 1st quarter, a butt wiped in the 2nd and another will demand I attend a tea party in the 3rd and 4th. If they are thirsty, they are thirsty. They don’t care if the game is in overtime. I will become a single mother until our team is knocked out of the playoffs.

I live in upstate New York. This is Buffalo Bills country. Our team has had a streak of bad luck. Still, we are devoted fans. After every loss my husband mopes around the house like a kid who lost his puppy. Every year Bills fans will say “This is our year.” I certainly hope so. I don’t need another person whining in my house. So, let’s go Buffalo!

My kids already drank the Kool-aid: