There is no denying the fact that Chris Brown is talented. He is also an asshole which makes it difficult to enjoy his music. Mr. Brown struck again, but this time on Twitter. He got into a “Tweet Fight” with a comedian named Jenny Johnson. Sure, she started it with an unsolicited jab. His responses are proof he is no gentleman. If he were my son I would beat his ass for talking to a woman this way. It is not cool. Brown deleted his Twitter account when this went viral. Unfortunately for him you can’t permanently erase anything on the Internet. Here is what went down:

@JennyJohnsonHi5 I know! Being a worthless piece of shit can really age a person.

@chrisbrown: take them teeth out when u Sucking my d*** HOE.

@chrisbrown: I should fart while ur giving me top

@JennyJohnsonHi5: Your mom must be so proud of you.

@chrisbrown: see.. I don’t even have to tell u what u already know. Thanks HO! #bushpig

(Do they have Bushpigs at the zoo? I’ve never heard of this animal. Golly, I need to get out more.)

@chrisbrown: mom says hello… She told me not to shart in ur mouth, wanted me to shit right on the retina,

(“shit right in the retina?” That is a big word for a guy who doesn’t know how to spell ho)

@JennyJohnsonHi5 Okay. I’m done. All I got from that exchange with Chris Brown is that he wants to shit and fart on me. 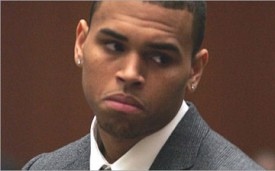