You can stop ‘liking’ posts about car accidents, grandma’s funeral and when the children of that guy you sat behind in 7th grade Science class get a puke virus. Facebook is rolling out five new emojjis today.   The instructions on how to access the new emojis were printed in several news articles in between the less important stories about ISIS, the crisis in Syria and a plane crash in Nepal.

Hold the “like” button on mobile or hover over the like button on desktop and five animated emoji pop up. Then, tap on love, haha, wow, sad or angry to express your reaction.

Facebook said it wants to give people a fast and simple way to express thoughts or feelings in a positive, supportive way, not to troll friends.  I remember the days when we would actually speak face to face with other human beings to express our feelings.  We actually laughed out loud.  Instead of typing LOL.  I know that is crazy.  Now, you don’t even have to comment. These guys will speak for you: 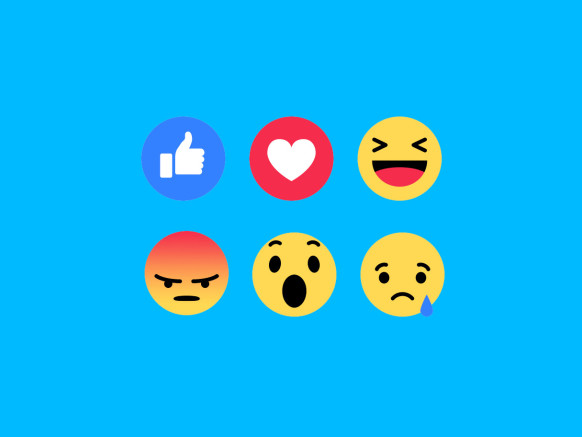 It took a year for Facebook to develop these emojis.  Think about that.  A corporation devoted 365 days to create animated stickers.  Facebook tested “Yay” in several countries, but it was dropped after Facebook’s team said it wasn’t universally understood.  There is an emoji for everything.  Many children know how to send a steaming pile of poop in a text message, but haven’t learned cursive.  I am going against ‘the man’ and teaching my children to write their names in cursive.  You can’t sign an important document with a crying cat, cactus or pan of eggs emoji.