I have read Cinderella while running on a treadmill, taught my daughter to juggle (to the best of my ability) while on the toilet and last night I made dinner while crouching on the ground. Why would one have to hide while making tacos? Well, because my 6-year-old son was making a stop motion Lego movie and I was in his shot. The kitchen cabinets, dishes and a few of my daughter’s toys were also in the way, but my giant head was too distracting. I bent down and raised the spatula up over the counter and into the pan. I was too exhausted to put up a fight. We had a long day of sledding, whining, more sledding, whining and so on. There is a certain amount of pressure to entertain kids on school break. Facebook makes it worse. Moms are posting pictures at the indoor inflatable bounce house park, Skyzone, bowling alley, movie theater, etc. They include a cutesy tag line which translated means “Look at how much fun my kids are having. I a great Mom.” I am going to start posting pictures of my kids playing Flappy Birds on their IPods in different rooms of the house each day. There must be some educational value in tap, pause, tap, pause, tap, tap, tap, tap, smash. No? Well I don’t even care. There comes a moment in each day where they could be painting gang signs on the living room wall and I wouldn’t care as long as it was quiet.

I don’t even mind when my kids keep stealing my tablet stand. Sometimes companies send me junk hoping I will review their product in return. I may sell my soul for money, but not for an “As Seen on TV” nut cracker. I have standards. This Rotating Desktop Tablet Stand by Kantek is actually really cool. 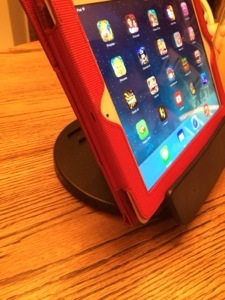 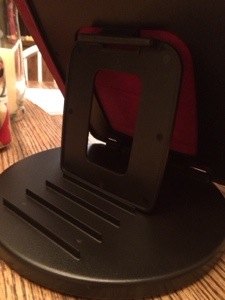 I thought for sure it would fall over, but it doesn’t. It is made of a sturdy plastic, swivels and folds flat so you can take it anywhere. It would actually be perfect for small business meetings. My kids can watch a video together without fighting over who gets to hold it. It’s funny how carrying something loses it’s appeal the older you get. I don’t want to hold anything. In fact, I would love to be carried everywhere. Shoplet.com sells the Tablet stand for $19.99 and others sell for $100. I would never pay a hundred bucks for this. That’s one less forehead wrinkle line I could eliminate if I got Botox. However, this is a deal for under $20. I highly recommend it.