My mother scolded me for not writing enough blog posts in recent days. Perhaps she finds my writing entertaining. Perhaps she takes joy in reading my stories and knowing I am suffering the same pains of motherhood. It could also be that she is trying to fill the void left by Erica Kane. Actually, I joke, but I’m lucky to have a loving and supportive mother. I could own a wire hanger factory and she would applaud. I am just exhausted. I have been guest co-hosting a local morning radio show. It may be one of the greatest jobs in the world. I am working with a radio legend and I get to talk without being interrupted. That hasn’t happened since my uterus went to work. However, being a morning radio show host is like having a newborn baby that doesn’t age. I have been going to bed at 11 and my alarm goes off at 4 a.m. Plus, my children have been taking turns waking up in the middle of the night. My 7-year-old creeps into my room and just stands next to the bed until I wake up. He doesn’t say anything because he “doesn’t want to startle me.” Instead, he sends me into full cardiac arrest. It’s really creepy. Mama needs to catch more z’s. If it was a permanent gig I would adjust my sleep schedule. In the meantime, I will walk around looking like Steve Buscemi.

I did read a few stories we must discuss.

“A Staten Island high school student is accused of bashing a classmate in the head with a metal stool for farting as he walked by her desk, a law-enforcement source said.”

I am sure many people can relate.
My living room or car transforms into a police station interrogation room any time a foul odor is emitted.

My children aren’t satisfied until the offender is identified. I am not as bothered with smelly gas as much as I am chewing or heavy breathing. The only difference between me and the chick in Staten Island is a huge pair of gold hoop earrings and restraint. I want to punch people sometimes. I curse the day I bought an economy size bag of shelled pistachios. If it were up to me my family would eat nothing but soft food while sitting at a table in a sound proof booth. I am not alone. A friend of mine has to leave the room when her husband eats. When you’re a newlywed everything your spouse does is adorable. After a few anniversaries most women develop Misophonia. This is an actual text from a friend of mine.

If you’ve never heard the term Misophonia here is a definition from the internet. We know the world wide web is never wrong.

When a person with misophonia is exposed to a sound in their trigger set, it results in an immediate negative emotional response. This response can range from acute annoyance to moderate discomfort or go all the way up to full-fledged rage and panic. Fight or flight reactions are not uncommon. While experiencing a trigger event, a person may become agitated, defensive or offensive, distance themselves from the trigger or possibly act out and express anger or rage at the source of the offending sound.

I seriously want to break things when someone eats an apple or carrot in my presence. 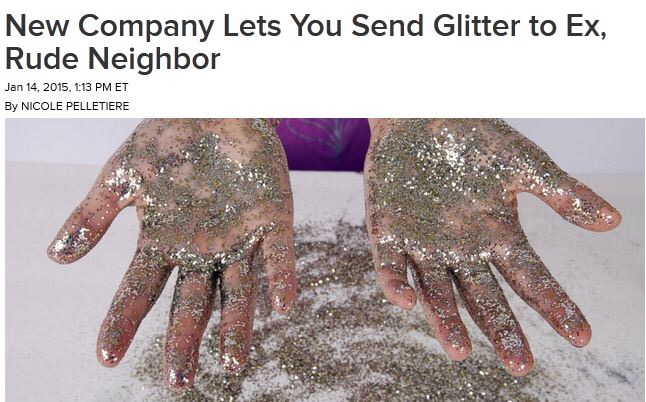 I show extreme prejudice to any product made with glitter. Glitter is Satan’s dust. There isn’t a handheld vacuum in the world that can pick that up. You will find glitter in your a** crack years after making a craft you found on Pinterest. It really is the perfect weapon. Well, unless you are Ke$ha. She loves glitter. She hates soap and water, but loves glitter. Unfortunately, less than 24 hours after this business opened online it temporarily suspended service. The owner couldn’t keep up with the demand. The following message was posted on the site:

Purchasing has been temporarily suspended. You guys have a sick fascination with shipping people glitter. We’ve received all orders & working through them. There was a tonne so be patient.

He underestimated the power of glitter. It’s too bad. Ann Curry was ‘this close’ to getting even with Matt Lauer. Plus, the girl in Staten Island could have gotten revenge on the gassy student by bedazzling him instead of assaulting him.