Thirteen years ago I found my life’s purpose. I became a mother. 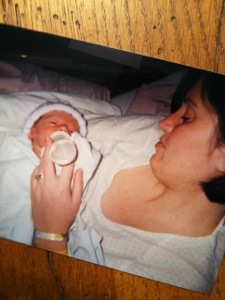 I didn’t think I would have children. I was focused on having a career. I was going to be a news reporter who made a lot of money. A Celine Dion song would play when I broke stories and fell in love with Robert Redford. Then, I would buy fancy things and travel to exotic places. Disney’s Animal Kingdom wasn’t on that list. (We’ve been three times) In middle school friends wrote, “Can’t wait 2 watch U on TV” in my yearbook. Yes, we abbreviated words way they back then, too.

I would be successful. I just had the wrong definition of success. Soon after graduating college, I met a boy, got pregnant and married. Yes, in that white trash order. I felt like a failure. I was not supposed to be another baby making machine stuck in a small town. My feelings changed on January 31, 2000, the day my son was born. I didn’t think it was possible to love someone that much. I suddenly realized what matters in this life and it is not a resume. My son gave me a life worth living. Sure, I still worked my way up to becoming a reporter, but it was what it is supposed to be, just a job.

This morning, I dug out some old photographs, to reminisce about time gone by. My daughter looked over my shoulder and asked, “Who is that?” It was me. “You don’t look old,” she said. Gee, thanks.

I closed my eyes, holding newborn pictures of my first born tightly to my chest. It seems like yesterday I would rock him and sing “Baby Mine.” I refused to lay him down long after he fell asleep. People would always say “That baby is going to want you to hold him all the time!” I am glad he did. They really do grow up fast. 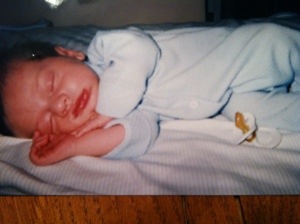 Just the other day someone complimented what a nice young man he has become. He is a smart, caring and funny boy who makes me proud every single day. Yet, I still see a babbling toddler who loved to play with dinosaurs. I know, no matter how many stars I wish on, time won’t stand still. Over the next few years he will grow taller than me. His voice will continue to deepen. Eventually, he will move away, but he will always be my baby.