One of my husband’s favorite TV shows is “How It’s Made” on the Science Network. My brain operates a little differently. As long as it works I could care less how it is made. However, after forcing him to watch “Magic Mike,” I agreed to sit through his program without complaining. Honestly, I don’t get why that movie was such a hit. A male stripper’s dance moves are not sexy. Can you even imagine your husband or boyfriend tearing off his pants to reveal a thong? Then, dancing around the bedroom jiggling his ass and throwing in an occasional pelvic thrust?

The documentary on how flip flops are made was more entertaining than the “Magic Mike” script. Then again, the only thing that excites me these days is the clearance rack at Target.

Judging by the worker’s fashion, this particular brand of flip flops is made in a factory in 1990. The cameraman is clearly obsessed with camels because this shot was shown repeatedly. 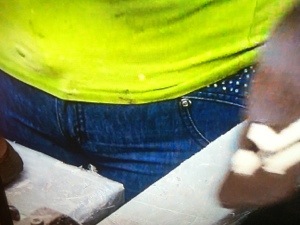 The announcer says, “Next they cover the bottom of the top sole and the top of the bottom sole with glue.” Pan away from her bedazzled jeans.

The shows ends with a shot of the finished product. Who better to model a pair of sandals than a woman who recently raced barefoot through rocks and barbed wire? 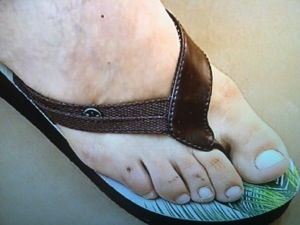 Perhaps the next episode will teach us how Band Aids are made. Then, we won’t have to look at her scabs. 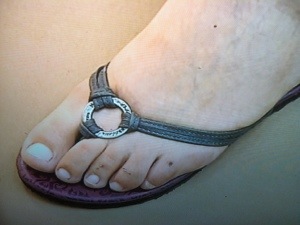 Tagged How it's made, magic mike, mom blogger, mom blogs. Bookmark the permalink.

One Response to How it’s made