I should have learned by now things never go as planned. I scored three tickets to Dr. Suess’ How the Grinch Stole Christmas! The Musical. (I am finally going to get that #1

Mom coffee mug.) My 6-year-old was siked. My 13-year-old mumbled in a pissed off tone (because that is the only way teenagers speak), “I guess I will go,” as if he was doing me a favor. My 4-year-old decided she would rather spend time with her grandmother. She absolutely adores my mother and threatens to move in with her on a weekly basis. (Honey, I am in trouble when puberty hits.) So, I dropped her off and we headed to the show. There was snow in the forecast and, according to the 5 p.m. weather report, the roads could get a bit “dicey.” Dicey? It was insane. We were 10 minutes into what was supposed to be a 35 minute trip when Mother Nature flipped me the bird, with two hands, while spinning. I couldn’t see the road or road signs. So, I followed the flow of traffic driving 10 mph in a 55 mph zone and…… took the westbound ramp when we needed to go east. I was frustrated, scared and aggravated. I would have to drive another five miles before I could turn around. Unfortunately, my children cope with conflict about as well as I do. My 6-year-old was screaming, “I can’t see the road” and “I don’t want to die” over and over again. My teenager was screaming at the 6-year-old to stop screaming. I was screaming at them both to calm down….. and we have another story for the therapist.

We made it to the show an hour and a half later. 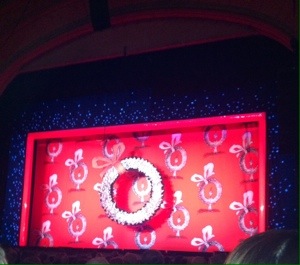 Gone was the fear of death. My 6-year-old was grinning ear to ear the entire show. It was fantastic from beginning to end! The set and lighting was beautiful. The music was incredible. The actors, especially the Grinch were spectacular. The Grinch’s voice sounded so familiar. ‘He sounds a lot like Robbie Rotten from the children’s TV show Lazy Town,’ I thought. ‘Wow. I’m such a loser for even making that connection,’ I thought again. 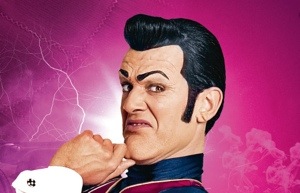 Well, loser or not I was right! It was Robbie Rotten! Well, his real name is Stefán Karl Stefánsson. I cannot believe I was this close to Robbie Rotten. You know you’re a mother when you are starstruck over a fictional character who play tricks on creepy puppet people.

I had no idea Mr. Stefánsson had such an amazing voice. I would dare say he was a better Grinch than Jim Carrey. Oh, no she didn’t. Yea, I just did and I will go there again. Honestly, I expected to like the musical. I did not expect to laugh as much or as hard as I did. I enjoyed the performance as much as my children. If this show is in your town run to get tickets. Then, cross your fingers you don’t traumatize your children driving through a snow storm to get to the theater.

(I must give a round of applause to the Rochester Broadway Theater League for bringing yet another wonderful show to our town!)

(Isn’t everything breaking news nowadays?) I met Robbie Rotten! THE Robbie Rotten. Mr. Stefánsson was not rotten at all. He was delightful and didn’t punch me in the face. I would have punched me in the face. I sounded like a stalker when we interviewed him on the radio. He was even kind enough to pose for a photo. My kids were impressed. 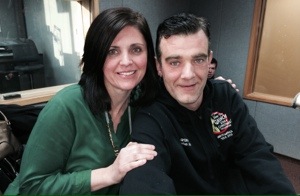