Apparently, this homework sheet was written in the 1950s. 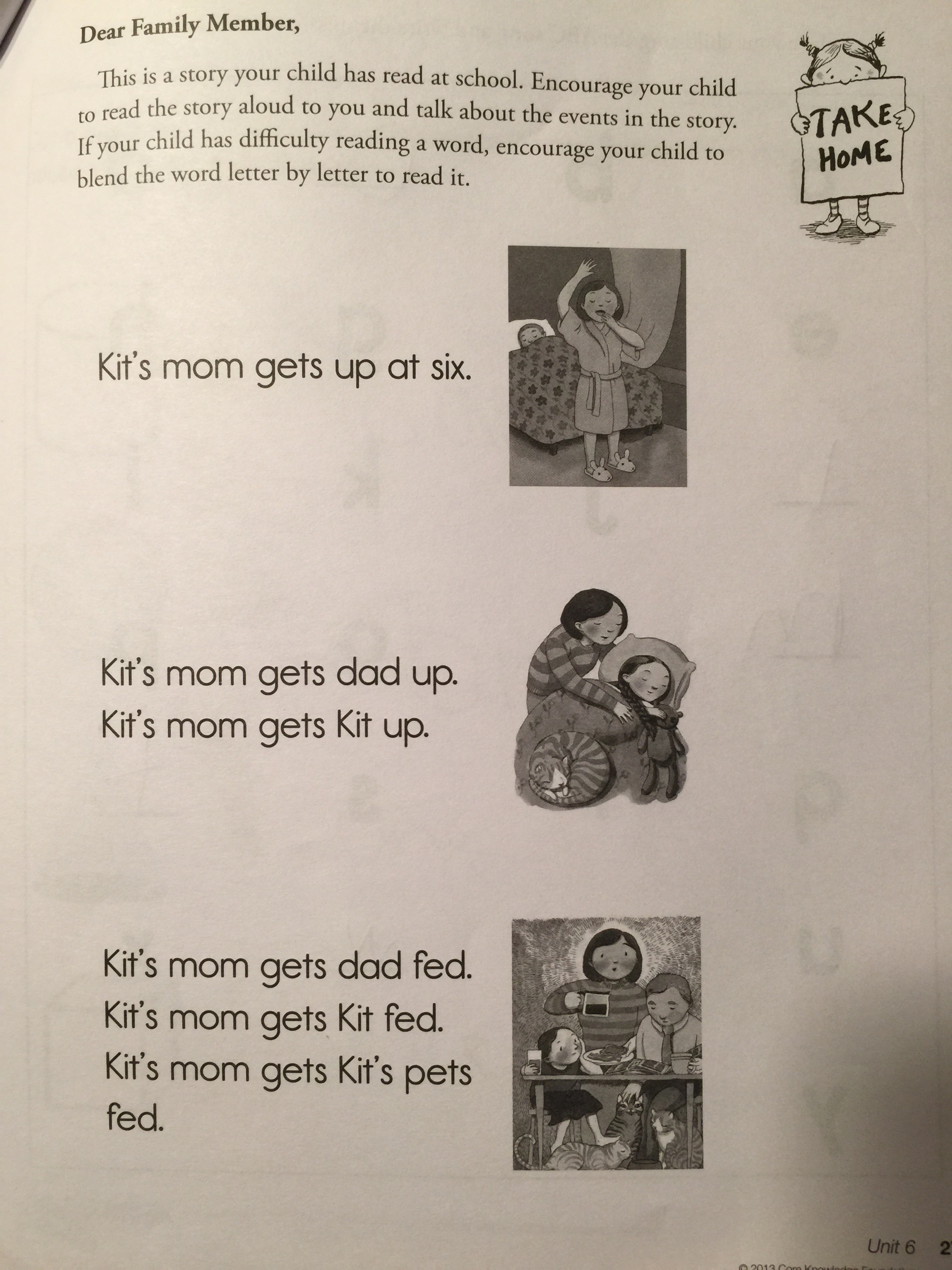 The instructions were to have my child read the story aloud and talk about the events in the story.  Okay, let’s do that.  I get up 30 minutes before my first child has to be out the door.  In fact, I am annoyed if I wake up a minute before the alarm goes off.  I haven’t had eight hours of sleep in fifteen years.  I need every second I can get.    Apparently, Kit’s mom gets up an hour early to do P90X, shower and cook breakfast. She even made bacon and had time to clean up the grease? On school days in my house you get juice, a bowl of cereal or, if I’m feeling chipper, a waffle cooked in the toaster.  I am not ashamed to admit I have given my children donuts and cake for breakfast.  Of course, I didn’t give them both at the same time.  Obviously, that would be unhealthy.  Before Bill Cosby was an alleged rapist he had an excellent joke in his act about why cake is a suitable breakfast.

How did Kit’s mom have time to cook in between nagging children to get up, dressed and announcing the time over and over?  And why in the hell is she feeding Kit’s dad? He needs to get up and 6, too and feed himself.   Since she did cook the least he could do is put the newspaper away and actually have a conversation with his family.  Is there really a difference between reading something on paper versus a phone?  I ask this question because I was chastised by a passive aggressive old man in the doctors office.   He walked into the waiting room and plopped down with a book in hand.  I was seated directly across from him.  The seats in waiting rooms should be arranged like a movie theater instead of like an AA meeting.  I don’t want to make eye contact or have small talk with sick strangers.   The chairs in my dentist’s office are so close together you could knock knees with someone.

I could feel this older gentleman staring at me.  I assumed he was admiring my beauty.   I have reached the age where I only get second glances from men who wait in line for early bird specials.  I didn’t look up from my phone until he began to read out loud.  I quickly realized he wasn’t reading from his book.  He was slowly reciting the sign posted above my head, “Please turn off all cell phones while in the waiting room and doctor’s office.”  He didn’t have a phone.  He was telling me to turn off my phone without telling me.   I was minding my own business.  The sound was turned off. There were three other people on their phones.  I smiled and finished reading what I had started.    Back off, grandpa.  I won’t be pushed around.   I paid a $35 co-pay to be here.  I will use my damn phone if I want to.   Afterall, I’m not some doormat like Kit’s mom.