“Mom, are you crying?” It’s a question my children ask once a month. I usually lie and tell them I am just tired. They aren’t ready to hear that the lining of mommy’s uterus is about to shed. They can relate to exhaustion. It’s extremely tiring having to fight with a sibling over everything. Last night the argument was over who got to point to a pigeon first. There is a series of books by Mo Williems about an elephant and pig. At the end of each book there is a pigeon hidden on the page. 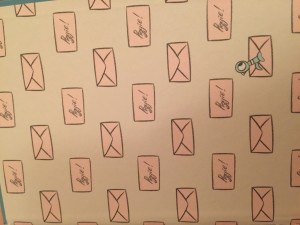 Okay, so it’s not hidden very well. I’m guessing Mo was “it” a lot as a child. My son pointed at the pigeon first. My daughter didn’t point first. She wanted to point first. “Let’s do it again,” I cheerfully suggested. My daughter refused. There are no ‘do-overs’ for children if they lose.

The P in PMS doesn’t stand for patience, but the S should stand for saint. The earth doesn’t stop spinning because my hormones are out of whack. It should, but it doesn’t. I still have to do things like help with homework and speak to people.

Last week I had to do both at once. My daughter’s school hosted ‘Family Reading Night.’ It’s a community event with different activities to encourage children to read. Some people just go for the free pizza.  If you want to catch a cold or vomit virus this is your chance.

You are herded from room to room to hear someone read or tell a story.   The children really enjoyed it.  Well, most of the children. I was in a group with Thing 1 and Thing 2. These twin boys were obnoxious. They are not children with special needs. They lack discipline. Their mother threw in the towel shortly after they exited the birthing canal.  At the beginning of the night she gave a half hearted attempt to corral them. It was similar to the effort you put forth to grab your wallet when someone else offers to pay for your dinner. The rest of the night she looked away when they were disruptive.

The ‘grand finale’ of this event was a demonstration by an enthusiastic  zookeeper.  Bless her heart for trying to teach a hundred or so children sitting on the floor about animals.  I applaud her for making the trip, but elementary school students cannot focus long. Just hold up the turtle and call it a day.

Thing 1 sat down briefly. Their mother decided to wait in the hallway while Thing 2 ran around and through the crowd of children. The P in PMS now stood for “Pissed off.” I got up and tried to catch him. Someone needed to tell him to sit down. It turns out I didn’t have to say a thing. We made eye contact and I gave him ‘the look.’ It was enough for him to run into the hallway with his mother. I hope they schedule this event at the beginning of the month next year.

Now, you do as I say, you pack up those things and take them away!