I love the first snowfall of the year. Local TV stations bust out the annual cold weather stories. Will the county have enough rock salt to clear the roads? Are the plows gassed up? Shoveling is difficult. Kids like to go sledding. I always dreaded that assignment as a reporter. It is riveting television.

We had our first blast of winter this week. My children were giddy when they looked out the window and saw a blanket of snow. 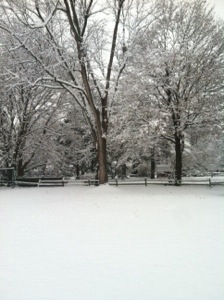 After spending what seemed like an eternity helping them put on cold weather gear we had a snowball fight, made snow angels and attempted to make a snowman. The fun ended when my 6-year-old decided to bury his face in the snow. “It burns. It burns.”
I giggled, comforted him and brought everyone inside; in that order.

I coaxed my 4-year-old daughter into the house with hot chocolate. She expected cocoa ready and waiting on the table. Unfortunately, our chef had the day off. “You said I could have hot chocolate.” I calmly explained that I needed to make it and by make it I mean microwave the milk. I hung the coats, gloves and hats to dry. Then, I went into the garage to organize the wet boots. Next, I would make the hot cocoa. That was a big mistake, HUGE. My daughter closed the door behind me and locked it. “Open this door,” I demanded. Nope. She was pouting on the couch. So, I hollered to my 6-year-old, “Unlock the door please!” He tried over and over and over again, but couldn’t get it open. Perhaps my prediction that he would grow up to be a rocket scientist is a little far fetched. He said, “Sorry can’t get it” and went back to playing Lego Batman 2. We eventually got inside through the front door. Then, I showed my daughter who is boss. She did not get any extra marshmallows with her hot chocolate.