Six years ago today I became a mother for the second time. Before my son was born I couldn’t imagine loving another child. Hours after he was born I thought about dropping him on the floor. I didn’t want to hurt my baby. In fact, it was love at first sight. He was a chubby newborn with beautiful eyes.

I didn’t realize at the time, but I was already having symptoms of postpartum depression.

It only got worse. I worried about dropping my son down the stairs or spilling hot water on his tiny body. These irrational fears consumed me. I tried to put on a happy face, but I was afraid to hold him or be alone. I thought I was losing my mind. After a week it was impossible to fake it. I was the bloated, hormonal version of Caillou. I whined and cried constantly. My OBGYN hooked me up with a psychiatrist. I was eager to go, hoping she would prescribe a miracle pill to make it all go away. Luckily, Tom Cruise wasn’t standing outside her office with picket signs. We were, however, greeted by two giant dogs. They circled our car like a pack of wolves. Her office was inside an old farm house. The entrance smelled like cat piss and pretzels. “You’ve got to be kidding me,” I said to my husband. The waiting room could have been featured on the show “Hoarders.” There was shit everywhere. This woman has her own problems. How is she going to solve mine?

She turned out to be pretty amazing. She was understanding, compassionate and wrote a script for a powerful antipsychotic drug. I may have been high, but she was my new best friend. After a few appointments I was starting to feel like myself again. On the fourth or fifth visit we were discussing my feelings when I noticed a large black bug crawl along the wall. The doctor wasn’t phased in the least. Then, there was another and another. Still, she didn’t bat an eyelash. I followed the third with my eyes as it crawled toward the ceiling. It turns out it was a bug party. There were 20 to 30 of these beetle looking creatures directly above my head. “Does that bother you?” she asked. “Sort of,” I replied. She explained that she likes to keep the windows open and let nature in. “Let’s talk about why that is upsetting,” she continued. It’s upsetting because there are f-ing bugs in your house. I may not have been healed, but I was good enough. I wouldn’t be back.

Postpartum depression sucks. My middle child does not. He is funny, loving and cute. His smile is infectious. Basically, he is my clone. He brings such joy to our family. I love him with all my heart even when, in fits of anger, he says he wants a new Mom. Sorry, kid, we would be lost without you. Happy 6th Birthday! 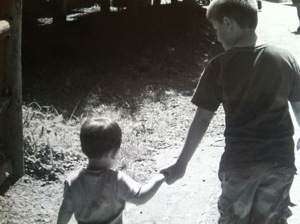 One Response to Middle child