While putting out the trash this evening I discovered treasure.  It was deep inside a can stored in the garage.   It’s one of those huge trash cans meant for smaller trash bags.  My children like to throw empty juice boxes in this container. It invites maggots once or twice a month. Is there anything more disgusting? Well, besides the crust in Pauly D’s hair. (Paul Mitchell is rolling over in his grave.)

Anyway,  I nearly had to climb inside to get this : 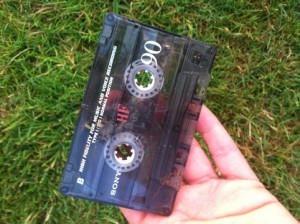 Um, 1985 called and it wants this back. Where did it come from? The last time someone made me a mixed tape “Ace of Base” was on top of the charts, I was using Oxy pads on a daily basis and got around town on a bike.  Mixed tapes tell a story.  It’s usually “I loved you, you broke my heart and now come sail away with me. ”

I didn’t throw this away. My husband has never seen it. What could have been recorded on this cassette? After explaining to my 12-year-old son what it was he said, “Well, play it.”  The only tape recorder we have in the house is this: 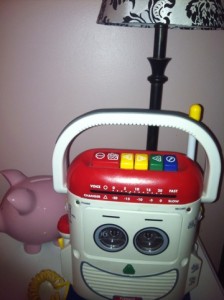 The batteries are dead!  The mystery remains……

One Response to Mixed Tape Mystery