Growing up, I remember my mom’s purse being off limits. If we attempted to put our grubby little fingers inside she would snap. Why? “Because it’s mine,” she declared. As a child that explanation seemed utterly ridiculous. Now, with three kids of my own, I get it. My bedroom isn’t mine. There are toys strewn everywhere. I am lucky if I get two bites of my dinner. “Can I have a some?” They even get first dibs on my phone. My purse, however, is mine. Well, at least that is what I thought until I reached for my wallet: 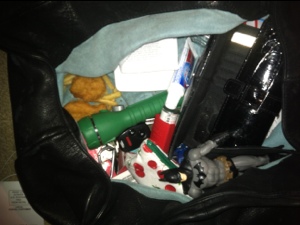 Apparently my daughter decided to save the rest of her lunch. My bag smells like I had a rendezvous with Ronald McDonald. (You have to wonder how that guy gets a date. “Yeah, I dress up as a clown who works for minimum wage at a fast food restaurant.) My son put his Batman figure inside just in case he wants to play with it and we aren’t home. (Because you never know when you will get the urge to fight crime) I have no idea how the flashlight became an accessory. The lining is stained from crayons, juice, etc. I have lost all control.