I want my 5-year-old to feel better, but for selfish reasons. Don’t call child protective services just yet. Of course, I love my son and don’t want him to suffer, but I would rather be shopping. With just two weeks until Christmas if I don’t get moving I may have to tell my kids Santa Claus died. Instead of chillin’ with the early bird mall walkers, I am home wiping a snotty nose and watching “Fred 3: Camp Fred.” It is a show on Nickelodeon. Fred Figglehorn is quite possibly the most annoying character on television. He speaks in a voice similar to Gilbert Godfrey and takes fashion advice from Larry King.

This virus started with a fever and vomiting. There was no warning, but there never is. It struck in the wee hours of the night. I told you how I woke up from a deep sleep and jumped out of bed to get a bucket. After reading that post a friend of mine, who doesn’t have children, asked, “You keep buckets in your bathroom?” Not buckets, plural. Bucket, singular. I’m not operating a hardware store here. We have one designated puke bucket. If you are sick the bucket follows you like a shadow. Of course, my children like to puke on the ground next to the bucket first. My 5-year-old just informed me that it’s against the law for him to throw up in the bucket. “See, it says right there. I could fall in and die,” he said, pointing to the warning label: 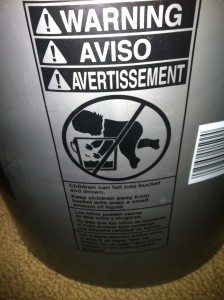 Maybe Santa will bring a new puke bucket. Well, that is, if he isn’t dead.