I am going to confess. I did not breastfeed my children. Blasphemy! There were several occasions, however, in which I wanted to tell the lactation consultant to “Suck it!” I tried to breastfeed the first two. They wouldn’t latch on. Thankfully, I had a lady whose nipples rested on her belly beating me up over it. She poured the guilt on thicker than my mother-in-law. I wanted my babies to guzzle the nutritious goo that comes out in the first few days. Plus, did she think I wanted to spend $5 on each bottle of formula? Formula that smells like crotch rot. No. Besides with baby number two I was bat shit crazy and needed serious anti-psychotics. I will share that story with you soon. Perhaps she should have considered a career teaching Driver’s Education. I’m certain having inverted nipples don’t matter in parallel parking. Anyway, this Time Magazine cover of a 3-year-old sucking his mother’s tit is disturbing. I hope mommy has put a down payment on therapy for this toddler. If a child can put together a complete sentence it’s time for a sippy cup. What do you think? 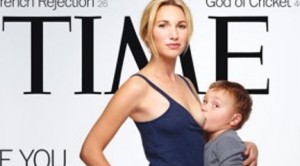