Have you read the fairy tale about the princess who lived happily ever after with an inmate who escaped from a maximum security prison?  I missed that one.   Joyce “Tillie” Mitchell apparently thought she was watching the Disney Channel, but it was MSNBC and a rerun of “Locked Up.”  Tillie is the woman in New York who helped two murderers escape because she was in love.  She actually had sexual intercourse with both men, but the fella who is serving time for decapitating his boss stole her heart.  Tillie should have watched a few episodes of Law & Order before committing a crime.   After her arrest she was singing like a bird without a lawyer present.

You’ve probably seen her on the news. 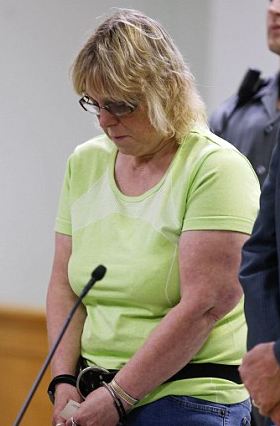 She was the older woman wearing shackles and a neon green shirt.  I would’ve chosen a neutral color to wear the day of my arrest.  Perhaps, add a pop of color with a necklace or bracelet.   Also,  there is a cutoff age for neon colors.  Just because the kids are wearing something doesn’t mean grandma should.    Nobody wants to see the ladies at the Bingo Hall wearing Daisy Dukes.  Tillie was sticking out like a sore thumb in the courtroom.  Tillie also needs to adjust the straps on her brassiere and lift those girls up.

I have been mesmerized by this story.  Why would anyone risk their freedom to help two criminals?   I realize the show “The Bachelor” would make one think there is only one man on earth, but there are other fish in the sea.

How does a mother prevent her daughter from becoming a Tillie?  I use the ‘scared straight’  method of parenting.  I plan on spending 18 years scaring the hell out of them and hope they are too afraid to commit a crime.  I turn down the radio and demand their full attention every time we see a prison.   We aren’t taking staycations to correctional facilities.   There is a prison on the way to the orthodontist’s office.   I explain how, if they commit a crime or do drugs, they will have to live behind the wire fence forever. There is no such thing as parole in my speech.    “There aren’t any video games, TVs, candy or chicken nuggets in there.”   I know that is not true, but they don’t.  I’m not going to tell them how criminals in the United States are living large.   Good ole’ Tillie  is about to find out exactly what it’s like.