There are rules in parenting. You don’t get a handbook when you leave the hospital with a newborn baby although some people probably should. The rules have to be followed, but you can bend them from time to time. For example, you have to feed your child breakfast. On occasion, when you’ve had a late night, breakfast could be chips and dip. My daughter makes the most ridiculous requests in the morning as if I am Bob Evans. She ate macaroni and cheese yesterday. I was too tired to argue. It was 7 a.m. on a Saturday. There should be laws about waking up that early on the weekend. She will appreciate sleep someday, but it will be too late. By that point she will be whipping up a bowl of Cheetos for her own child for breakfast. She ate fruit and stuff throughout the day. So, it evens itself out.

The other obvious parenting rule is you shouldn’t leave your children home alone. Of course, there are times when you can’t help it. For example, the time your extended family booked an early morning flight to France and you overslept nearly missing your flight. Then, you put a teenage niece in charge of counting the kids in the van to make sure all was accounted for, but she mistakes the annoying neighbor kid for your son Kevin. S**t happens.

My husband broke the most important rule in parenting. The ‘never drink out of an open container’ rule. I bought five 6 packs of soda at the local supermarket. It was buy two, get three free and I figured who needs teeth anyway? My children felt cool having their own bottle of soda. They took a few sips, replaced the lid and put the backwash in the refrigerator. In a moment of confusion my husband grabbed a bottle out of the refrigerator and took a swig. 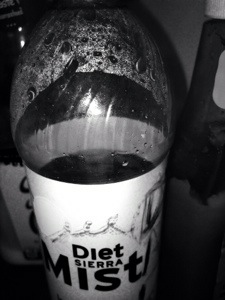 He gulped and looked at me with his eyes pleading, “That wasn’t what I think it was.” I laughed. I laughed so hard my stomach hurt. There are no rules about laughing at someone else’s parenting mistake.