I am having a hard enough time discussing the “birds and the bees” with my 13-year-old. I cannot imagine having the talk with a 5-year-old. The Chicago Board of Education passed a resolution to begin sex education in kindergarten. What kind of world are we living in?

I have seen the stats on teen pregnancy. It is sad that kids are having sex at such a young age. I was a prude. My boyfriend in high school broke up with me when I wouldn’t put out after his junior prom. Thank God my knees were locked. He grew up to be a real tool.

I had no idea what sex was in kindergarten. We were actually allowed to be kids. We played outside and woke up early on Saturday morning to watch cartoons. Schools in Rochester, NY hand out condoms like they are candy. I know it’s better to prevent an unwanted pregnancy or the spread of STD’s. Would it be crazy to encourage abstinence, at least until they’ve been taught long division? I suppose it doesn’t help that they have role models like Taylor Swift. That girl gets around.

I know I can’t avoid the subject forever. Is it wrong to let Netflix teach your child about sex? Yeah, I suppose you are right. A friend of mine, searching for a book on the subject, discovered these gems: 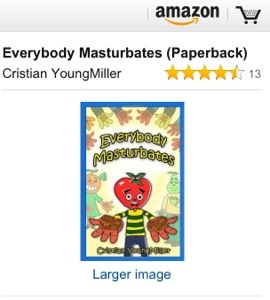 If you have a daughter, don’t worry. They have you covered with this:

The message of the artist here is water your lawns afterward? I guess you can’t pass the subject off to a book or on-demand movies. You actually have to have a conversation with your kids or send them to school in Chicago.