It’s always a good time with my friends until one of the girls talks about sex in front of my pubescent son. We met today at a local pumpkin farm, husbands and children in tow. It’s an annual tradition. This place is like a poor man’s amusement park. Admission is less than $50 for a family of five. There are huge slides, games, a corn maze, wagon rides, farm animals, etc. Plus, this year they added a zip line: 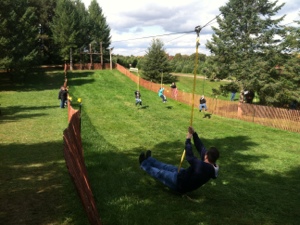 I was the middle-aged woman screaming like I had just bungee jumped off the grand canyon. It was fun though. Actually, it was the perfect day. We ate cider donuts and picked pumpkins. There is nothing like Autumn in New York: 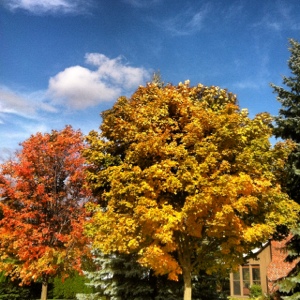 There was a food station inside a barn. However, we decided not to eat a meal in the same vicinity where Alpaca’s take a shit. So, we went to a nearby restaurant for lunch. Other than a brief tantrum from my 2-year-old, my kids were pretty well behaved. Sure, my 5-year-old announced aloud at the farm that the slide “hurt my balls.” I suppose it could have been worse. He could have kicked someone in the testicles.

I have an amazing group of friends. We always have great conversation and a lot of laughs. While at the restaurant one of my friends started to tell a story, “Yeah, she is pregnant again. She tried to say it was immaculate conception. Okay, like they aren’t having sex all the time.” (Cue sound effect: screeching tires) Ahhhhh! Not the S word. “Babababababa,” I shouted to interrupt the conversation, motioning toward my 12-year-old son. I couldn’t get my lips to form an actual word. “Oh, sorry. I forget.” She can forget because she doesn’t have any kids. I have to speak like this on a regular basis:
“We aren’t making good decisions.”
“Good sharing!”
“Let’s use our inside voices.”

She can drop words like p**** or c*** without giving it a second thought. I suppose I’m lucky she didn’t.

My 5-year-old has been sick for two days.  Initially, I thought I had been duped.  The sneezing and coughing magically stopped after I decided he would stay home from school. He even asked if I would take him to the park.  Honey,  are those superhero masks cutting off oxygen to your brain? Hell to the no. Instead, he played with toys, video games and even made a brief appearance as Spiderman. 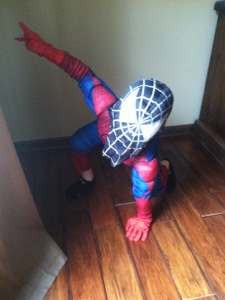 He enjoyed ice cream and potato chips. We watched all his favorite TV shows. “This is what I’m missing when I go to school,” he said.  Hardly. I am just trying to make up for my completely irrational reaction to his spilling juice on the carpet. It wasn’t necessary for me to cry, but I have PMS.

The truth is if he weren’t home I would be scrubbing toilets and bathroom walls. You may ask, “The wall?” Yes, on occasion this kid gets urine on the wall. How? I have no f-ing idea. It is more than a splatter.  He is easily distracted. I imagine his brain works like this:

In all honesty, his cough got worse as the day went on. He woke up this morning with a fever. My daughter is jealous he is getting so much attention. She put his backpack near the door and said, “Spiderman needs to go back to school.”

Can anyone out there bail be out of jail? My 5-year-old son is turning me in. He is in kindergarten and just started bringing home small paper books. Get down from your tree hippie, I know all books are made out of paper. I mean, these are printed at the school. I’m sure they pay a publishing company a ridiculous amount of money for the right to copy 4 pages. I could have written these books myself. “I can run. You can run. We can run.” ( I think it’s pretty presumptuous of the author to assume we all can run.) There are a lot of popular children’s books written like this. Take, for example, “Goodnight Moon.” I know what you’re thinking, “But that’s a classic.” If the old lady was running instead of whispering hush that book would be a copied handout. My 12-year-old can draw better illustrations.

My son brings home a new miniature book every night. We read it five times, send it back and a new one comes home the next day. Well, I decided to photocopy the book so my son can continue practicing at home. “You can’t do that,” my son said. He can’t distinguish his right foot from his left, but he knows copyright laws? I’m not selling the book on the black market. It’s stapled together for goodness sake. “I’m telling my teacher.” Awesome. Now, she will not only know I made my husband sleep on the couch, but that I steal too.

Sometimes I envy people who can put their child into bed at night and walk away. I’m a wuss and was never able to leave the room when my babies were crying. So, I have rocked them to sleep or laid down with them. (We even went for car rides at midnight to get my son to sleep) There is nothing like having a child fall asleep in your arms. However, there are those nights when you just want the kids to go to f****** sleep.

My husband and I have been trying to watch a movie together for the past, oh, year or so. We were going to make it happen. I was holding my daughter in our room. She was almost asleep, but the volume on the TV was too loud. The remote was near the end of the bed. I tried leaning to the side and stretching my arm, but it was out of my reach. I attempted to grab the remote with my toes. I got a hold of it, but when I bent my knee my leg cramped up. It was like a slow motion sequence in a movie. I grabbed at the back of my thigh, the remote tumbled end over end to the ground and I mouthed, “Noooooooo!” My daughter’s eyes were getting heavy. I couldn’t move. So, I texted my husband these orders:

It would have worked. My husband completed the mission. This is a man who low crawled through a war zone in Iraq. He was quiet and completely out of my daughter’s sight. The only thing I saw was his hand reach up and turn down the volume. It appeared to be detached from his body. I burst into laughter. This is the length a parent has to go to get time alone? We never did watch a movie.