Billy Ray Cyrus’ heart is beyond achy. It is broken. The world watched his sweet little girl dance like a slut on the MTV Video Music Awards. She was apparently doing something called “Twerking.” I am not sure what that is, but I can tell you she was humping everything in sight while sticking out her freakishly long tongue. 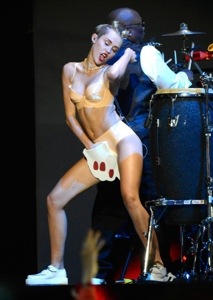 I am no prude, but Holy S***!
Elvis was reportedly watching from his hideout and said, “and they wouldn’t show my leg shaking on TV?” Miley wore a rubber bikini (and had a serious wedgie) while teddy bears danced around the stage. This freeze frame captured everyone’s emotion during that performance.

Several years ago, when I worked as a news reporter, I covered a Hanna Montana concert for a local station. Little girls swarmed the arena to see the singer they idolized. They wore concert t-shirts, waved signs and screamed her name. Well, it was a name made up by Disney executives, but you get my point. Miley Cyrus made a fortune. It wasn’t enough. She didn’t want to be Hanna anymore. “I grew up,” she says. No, she has not.

The rest of the show went something like this:

* Justin Timberlake let his former N’Snyc band members join him on stage for a few seconds. Then the overly hyped “reunion” was over. Justin was all This is my night bitches. Now, go back in the basement and keep Joey Fatone away from the vending machine.

* Macklemore, who despite his success still gets his car “did” at Supercuts, performed “Same Love.” It gave me goosebumps. Love him.

* Taylor Swift gave out the award for Best Male Video. Surprisingly, she has not slept with any of this year’s nominees. Taylor was seen on camera telling an ex in some British boy band to “Shut the f-up.”

* Lady Gaga opened the show from a toilet bowl. 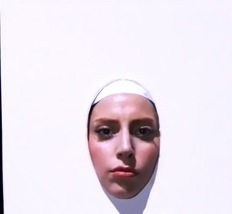 * Rihanna never got out of her seat.

* The fire department had to evacuate the building to make room for Kanye’s ego. #BUILDINGCODE

* Lil (not to be confused with little) Kim is out of jail.

* TLC made an appearance. The duet (Lefteye 4-eva) is still chasing waterfalls. After all these years, Chili still has killer abs, but doesn’t want no scrubs.

* The audio guy fell asleep after 10 minutes into the show because it was difficult to hear the music while everyone lip synced.

* Katy Perry was a boxer.

MTV will now resume its regularly scheduled programming which includes reality shows about teen pregnancy and a knock off of Tosh.O They deeply apologize for showing clips of music videos.